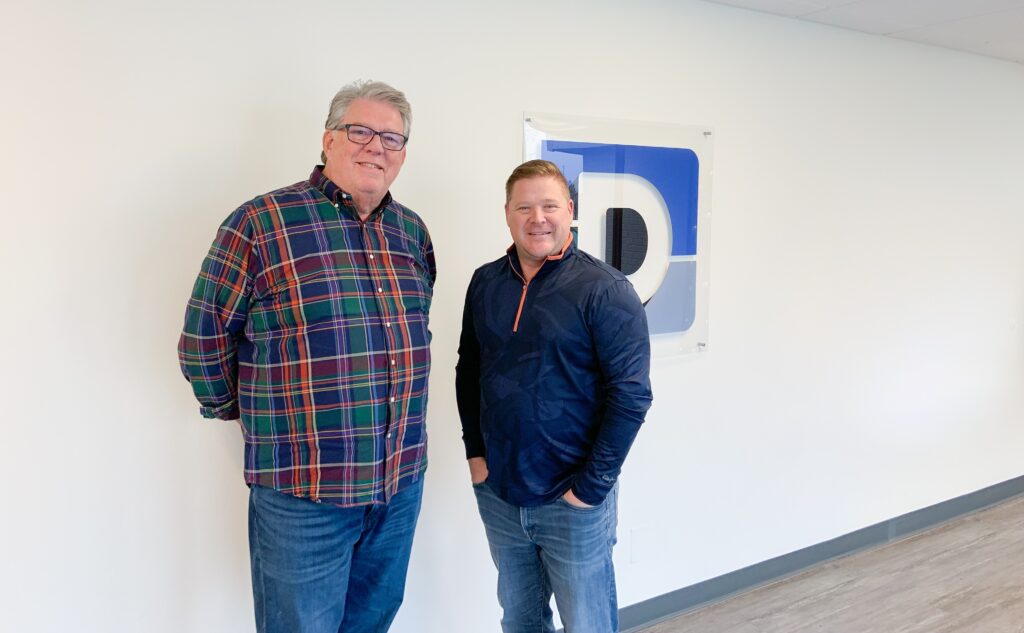 Don Engel (left) has been elected Chairman of the Board of Managers at Deltec Solutions, and has named Steve Davis (right) as the next President and CEO.

Deltec Solutions headquartered in Muncie has announced the appointment of Steve Davis as President and CEO, replacing Don Engel, who has been elected Chairman of the Board and Chief Financial Officer. Davis will assume his new responsibilities on Monday, January 2nd. Engel has been President and CEO since 2009 and replaces Wil Davis, who remains on the Board of Managers.

On Sunday night, the Indianapolis Fire Department reported that a female driver drove her car onto the downtown Indianapolis canal before breaking through the ice and plunging into the freezing cold water. When the Indianapolis Fire Department arrived at the scene, the driver was already out of the vehicle. The woman told firefighters that she was following her GPS navigation system. The driver, identified as 33-year-old Biankia Larayne Gleason was arrested for operating a vehicle while intoxicated.

IPR reports Indiana Republican legislative leaders say they’re not prepared to enact any significant abortion legislation in the 2023 session. Ultra-conservative lawmakers and advocates were unhappy with some of the exceptions in this year’s near-total abortion ban. Particularly, that includes allowing abortions in some cases of rape or incest. And they’ve indicated they’ll work to remove those exceptions going forward. But House Speaker Todd Huston and Senate President Pro Tem Rodric Bray have both said they don’t anticipate advancing further anti-abortion bills in 2023.

Two gifts totaling $7.5 million were announced by Ball State University earlier this month following the final meeting of the university board of trustees for 2022. BSU is receiving a $5 million gift from Marianne Glick and her husband, Mike Woods, and a $2.5 million gift from June Scheumann. The university said in a press release that the money will be used to advance development and construction of the performing arts center in the Village, which was announced in March.

The Indianapolis Zoo announced that their Tiger Cub, “Nicholas” has died. The cub had a liver defect that was likely present at birth or soon after. Another tiger cub at the zoo named “Helina” has also been diagnosed with the same liver condition and is undergoing treatment.

The Los Angeles Chargers’ defense allowed just one field goal as they dominated the Indianapolis Colts 20-3 on Monday Night Football at Lucas Oil Stadium. The Chargers sacked Colts quarterback Nick Foles seven times and also picked him off three times. Austin Ekeler led the offense with 67 rushing yards and two touchdowns. The Chargers improved to 9-and-6 and also clinched a playoff spot for the first time since 2018. Foles struggled in his first start of the season, completing 17-of-29 passes for 143 yards and three interceptions. Indianapolis has lost five straight and fall to 4-10-and-1.

Fort Wayne police say they have caught their suspect in a Christmas Eve robbery. Saturday afternoon, police got distressing calls that a man was robbing an IHOP with an axe and a knife, even holding the manager knifepoint as he stole the money. Officers got there as fast as they could, but not before the suspect, Ian Persing, ran on foot with both his weapons. Police caught Persing after he fled by a nearby Petco, where police put him under arrest. After all the money was returned to the IHOP, Persing was charged with armed robbery.

Temperatures will warm up this week all across Indiana. The National Weather Service says many places in Indiana will get temperatures in the 50s starting Thursday and lasting through the weekend. There is also very little to no chance of snow. You are, however, being urged to watch out for fog and the occasional freezing drizzle.

Are you looking to ring in the New Year without falling asleep early? If so, you and your family might want to check out Countdown to Noon at the Children’s Museum of Indianapolis. Peterman Brothers are teaming with the museum to sponsor the family-friendly event on New Year’s Eve. Here, your family can enjoy music and various activities before counting down to 2023. It will run from 10 a.m. to 1:30 p.m. Learn more at childrensmuseum.org.

Severe winter weather has created challenges for many travel companies over the last few days, especially Southwest Airlines. The majority of the airline’s flights out of the Indianapolis International Airport were canceled Monday, WISH TV reports. And as of 8am Tuesday, the company had cancelled 75% of its flights in and out of the airport. The department of Transportation is investigating.

WTHR reports millions of people who enrolled in Medicaid during the COVID-19 pandemic could start to lose their coverage on April 1 under the $1.7 trillion spending package cleared by Congress. The legislation will sunset a requirement of the COVID-19 public health emergency that prohibited states from removing people off Medicaid. The Biden administration has been under mounting pressure to declare the public health emergency over, with 25 Republican governors asking the president to end it in a letter on Monday, which cited growing concerns about bloated Medicaid enrollment.

The Indiana Department of Health confirmed Tuesday that there are 16 new flu deaths in Indiana. The total number of flu deaths this season is 64. There were three flu deaths at this same point last flu season which was 83 total for the full season.

The report covers deaths through Dec. 17.