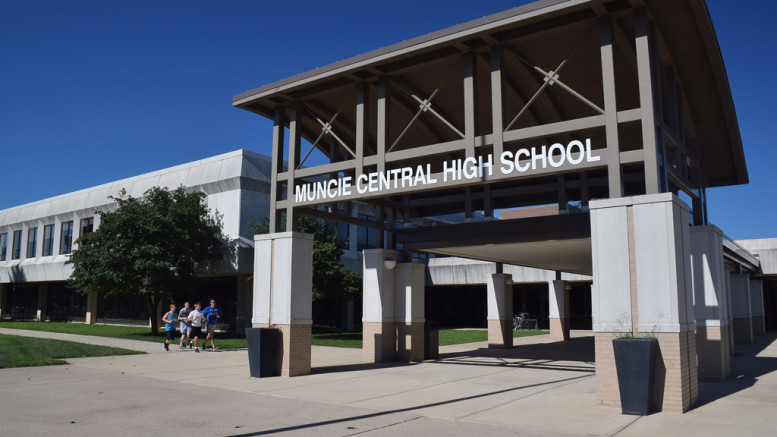 The Starpress reports Muncie Central High School will soon get a new football and soccer field along with a new stadium. Phase One of the $5.8 million project was approved by the Muncie Community Schools board last month. The football field will be replaced with artificial turf. A new restroom and concession building will also be built near the south end of the field.The project will be funded by a bond issue to be paid back over three years.

Grants totaling $380,809 were awarded from The Community Foundation of Muncie and Delaware County to benefit the community between September and October 2022. An additional $209,176 was awarded to nonprofit organizations from designated funds. Designated funds are established by donors or by nonprofits to provide ongoing support for specified organizations.

A New Castle man was killed in a motorcycle crash over the weekend, the Henry County Sheriff’s Office said Sunday night. Around 7:30 p.m. Sunday, New Castle EMS drove upon a motorcycle crash that had occurred sometime earlier. Paramedics discovered a motorcycle left the roadway in a curve, crashing and flipping several times. 45 year old Eric Steven of New Castle was pronounced dead at the scene from injuries suffered in the crash.

Area lawmakers are encouraging local and statewide providers to apply for a portion of the $50 million state grant fund dedicated to helping Hoosier communities tackle health challenges. State Rep. Elizabeth Rowray said the grant funding available to local and statewide service providers and planning organizations can be used to prevent or reduce mental and physical health issues for Hoosiers, including in the areas of tobacco use, food insecurity, obesity, lead exposure, hepatitis C, and more.

The Anderson Police Department is searching for a vehicle that struck a pedestrian Sunday and left the scene of the accident. APD responded at 9:21 p.m. to a report of a pedestrian struck in the 2100 block of South Scatterfield Road by a white or light-colored Chevrolet 1500 pick-up truck. According to a press release, when officers arrived, they found 31 year old Charles A. Adams, lying in the roadway. Adams was transported to a local hospital and then transferred to an Indianapolis hospital where he remains in critical condition.

Indiana University Health has expanded its Lung Cancer Screening Program to IU Health Blackford Hospital in Hartford City. The program has existed for ten years beginning at IU Health Ball Memorial Hospital in 2012. Since that time, the program has provided over 2,865 screenings and has been successful in diagnosing over 56 lung cancer cases – with most of those cases being either stage I or II.

A Wayne County Jail Deputy was sent to the hospital after being exposed to fentanyl.Jail Deputy Brandon Creech was giving a pat down search on an inmate during booking proceedings. As the arrestee was being searched, the deputy found a grinder and bag of powder.That powder was tested and was positive for fentanyl. Shortly after the pat down,  Deputy Creech fell ill and collapsed. Other deputies and medical staff gave the deputy three doses of Narcan. Deputy Creech was taken to the hospital for further treatment and was released a few hours later.

At this month’s Muncie Redevelopment Commission meeting, Muncie Mayor Dan Ridenour said the Riverbend Flats development in south Muncie should be completed soon with the apartment complex opening for business in early Spring. Ridenour said a new Pizza King will also be built nearby.

The Erskine Green Training Institute in downtown Muncie is taking applications for their 13-week training program which begins in January of 2023. Special needs students are trained in a variety of hospitality-oriented jobs including Kitchen cook, front desk agent and patient transport. Visit erskinegreeninstitute.org for the online application.

A coalition of 8 organizations handed out over 5000 free books to children during Ball State’s homecoming parade. The free book give-away is designed to help educate kids about the importance of reading.

A Muncie man who tortured and killed his ex- girlfriend was sentenced Friday to 62 years in prison. 37 year old Christopher Eugene Allison, had pleaded guilty to murder and neglect of a dependent in the November 2020 slaying of 27-year-old Mary A. Grubb. The Starpress reports the slaying took place in Allison’s home, where Grubb had taken their daughter for a visit with her father. The victim’s body was later found in the bed of a pickup truck near the Water Bowl in Muncie.

Fall Leaf Pickup in Yorktown begins this Saturday, October 29.  Residents are asked to bag leaves using large brown paper lawn & leaf bags that you can find at hardware and department stores. Pickup begins at 6a each Saturday: October 29, November 5, November 11, and November 19th.

Fox59 reports a 56-year-old man died following a Monday shooting in Muncie.  According to the Muncie Police Department, officers were dispatched to the 1900 block of W. Memorial around 12:15 a.m. Monday. Officers arrived to find 56-year-old Daniel Dunsmore had been shot in the chest. Dunsmore was taken to IU Health Ball Memorial Hospital, where he later died from his injuries. The shooting remains under investigation.

The former Fishers City Hall building is coming down. And the public is watching. For those who choose to attend at 1 Municipal Drive, the city has set up bleachers outside the construction fence so you can watch construction crews tear down the building. They’ll be working from 9am to 4pm today. The building is coming down because the foundation is damaged and irreparable. Fishers is building a new city hall and arts center in its place to be completed in the spring of 2024.

Indianapolis Colts head coach Frank Reich announced Monday quarterback Sam Ehlinger will start over Matt Ryan against the Washington Commanders Sunday and for the rest of the year. According to Reich, Ryan has a grade 2 shoulder separation. The announcement comes after the Colts lost to the Tennessee Titans Sunday for the fifth straight time. Ryan completed 33 of 44 passes for 243 yards and one touchdown in the 19-10 loss. He also threw two interceptions.

The Herald Bulleting reports Anderson’s “Can Man,” Larry VanNess, died Monday at an Indianapolis-area hospital, according to his caregiver, Rachel Landers. VanNess who was 75 years old, died from medical issues after being struck by a car in downtown Anderson on Oct. 2.

The Anderson Police Department is searching for a “light-colored” Chevrolet 1500 pickup truck that struck a pedestrian Sunday and left the scene of the accident. APD responded at 9:21 p.m. to a report of a pedestrian struck in the 2100 block of South Scatterfield Road by a white or light-colored Chevrolet 1500 pick-up truck. According to a press release, when officers arrived, they found 31 year old Charles A. Adams, lying in the roadway. Adams was transported to a local hospital and then transferred to an Indianapolis hospital where he remains in critical condition.

A Pendleton woman is being detained in Florida on a child kidnapping charge awaiting extradition back to Madison County. The father of the missing 3-year-old child, told officers the child’s mother, Ashley Laing, had not given him the child and was in violation of a recent child custody order providing him with full custody. On Friday, sheriff’s detectives were able to track Laing to a motel in Clearwater, Florida. With the assistance of the Clearwater Police Department, she was taken into custody. The young child was found unharmed according to a Herald Bulletin report.