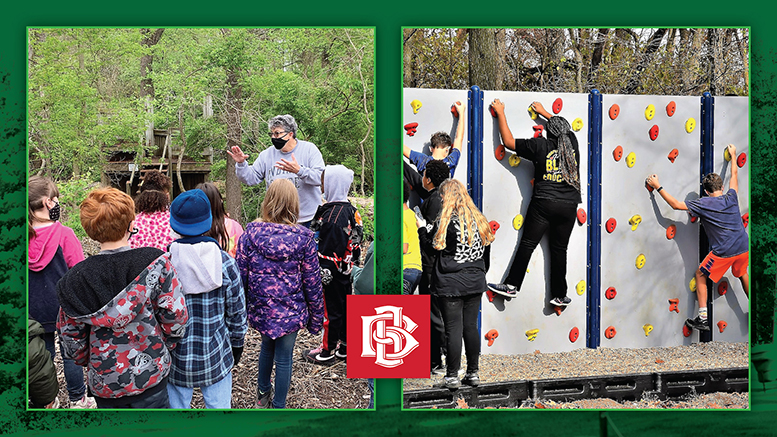 The Ball Brothers Foundation approved over $5 million in funding for 39 projects during its second round of grantmaking in 2022. The grants included funding to support efforts that further bolster school counseling programs and expand outdoor learning throughout schools in the heart of Muncie. View the grant recipients at munciejournal.com

Madjax is currently accepting applications for the 2023 Maker Cohorts including Makers in Residence, Educator Makers in Residence and Fab Lab Fellows. These year-long fellowships provide the opportunity for makers, artists, students, and educators to contribute to the Madjax Maker Force community by leading workshops and developing artistic and placemaking projects. The fellowships provide membership access to the Design and Fabrication spaces at Madjax, a stipend, and access to training and networking opportunities. To apply visit www.madjax.org/fellowships.

When you order something from Amazon, whether it’s a Christmas gift or an everyday item, your order is likely being processed by some of the 24,000 Hoosiers who work for the company. An Amazon spokesperson says they’re ready to deliver this holiday season. Woodson was speaking at the Greenwood fulfillment center, which he described as a sub-same-day fulfillment center, which has “hundreds of thousands of items that they can deliver to customers in two hours or less.” He said that’s part of how the company hopes to fulfill holiday orders quickly. In Indiana we have over 22,000 small to medium-sized businesses that continue to sell on our marketplace and platforms to reach millions of customers across the globe,”

The Indiana Pacers have won five games in a row. They beat the Orlando Magic Monday night 123-102 and outscored the Magic by 10 in both the second and third quarters. The Pacers were led in scoring by Benedict Mathurin who had 22 points. In total, they had six players finish in double figures. Their record is now 10-6, which puts them two games out of first place in the Central Division. The Pacers take on the 9-8 Minnesota Timberwolves tonight.

On Saturday, Dec 3, the flute ensemble from America’s Hometown Band will open Minnetrista’s Enchanted Luminaria Walk — the annual indoor/outdoor holiday celebration weekend located at 1200 N Minnetrista Parkway in Muncie. The twelve-member group of flautists, known as the Central Indiana Flute Choir, is the first of the music performance groups for the first evening and will be situated on the second-floor balcony of the main Minnetrista building from 5:00 to 5:50 pm.

The NCAA Women’s Basketball Final Four is returning to Indianapolis. The City will host the NCAA Women’s Basketball Final Four in 2028 at Gainbridge Fieldhouse. It is scheduled for March 31 through April 2 of 2028. Indianapolis has also hosted the women’s final four in 2005, 2011, and 2016. In 2016, when the event was held at what was then Bankers Life Fieldhouse.

What you pay for healthcare will be discussed when the state legislature convenes in January, says Indiana’s Speaker of the House Todd Huston. Huston says he believes the answer is to create more competition. Huston was speaking at an event put on by the Indiana Chamber Monday. Hospital bills can be through the roof for simple procedures and visits to the ER. That’s why the Indiana General Assembly plans to take up the issue in January.

The Indiana Department of Natural Resources is providing FREE admission to all of its properties on Black Friday. The DNR is also encouraging all visitors to share photos of their visit on social media.

The StarPress reports that a new Yorktown town manager could be hired in December. Lon Fox, president of the Yorktown Town Council, said  that the number of candidates had been narrowed to two finalists and a decision about the hiring is expected to be made at the last council meeting of year on Dec. 19.

Founder and Owner of Rosebud Coffee House, Tiara Hicks recently received the 2022 Community-Impact Entrepreneur of the Year Award at this year’s Entrepreneur Showcase Week hosted by the Innovation Connector. In 2020, Hicks opened Rosebud Coffeehouse in Muncie at the corner of Memorial and Hoyt.

No decision was made yesterday in the case of the Delphi murders to unseal documents relating to the arrest of Richard Allen. Judge Fran Gull decided to take the motion to release the documents “under advisement,” and will make a decision at a later date. A bond hearing for Richard Allen, the 50-year-old Delphi man charged with the murders of Abigail Williams and Liberty German, has been set for February 17th, 2023. Allen’s legal team filed a motion Monday requesting Allen be let out of jail while awaiting trial. They asked for a “reasonable” bail amount.

The Enchanted Luminaria Walk at Minnetrista will take place on December 2 and 3 from 5–9 p.m. each night. This free community event is Minnetrista’s give to the community. Enjoy warm hot chocolate and Minnetrista apple cider, winter craft kits, holiday shopping, enchanting lights, and more in celebration of the season. For more information, visit minnetrista.net

An Anderson man has been sentenced to 18 months in prison after pleading guilty to being a Felon in possession of a firearm. 50 year old Detreck Wilson admitted to officers that he had two prior felony convictions and possessed the handgun found on a nightstand of the Anderson Inn where police found him.  Wilson was previously convicted of strangulation and nonsupport of a dependent in Madison County, according to the Herald Bulletin.