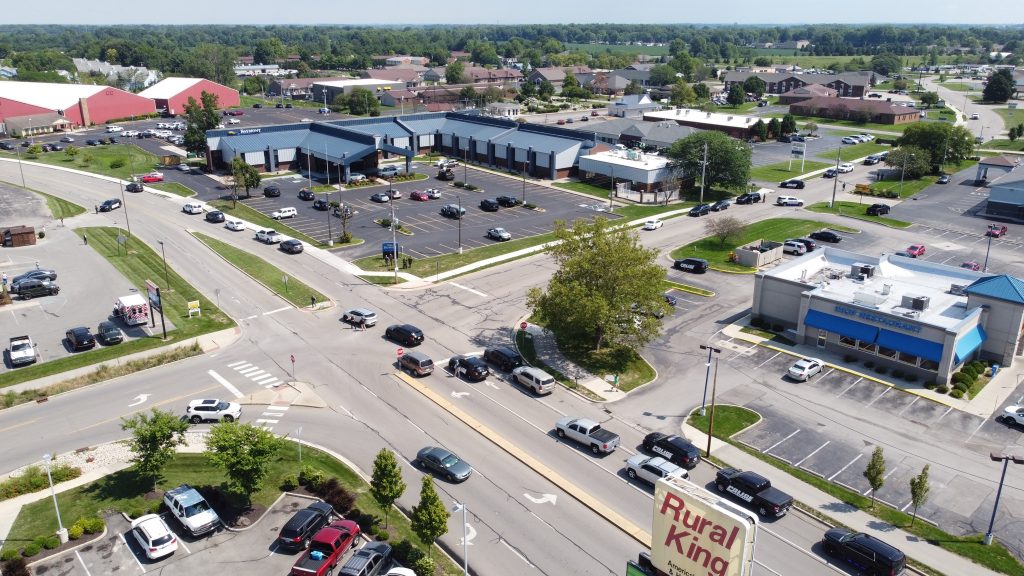 The scene from the air around the Baymont Inn. Photo by Mike Rhodes

Yesterday, shortly before 11 a.m., officers responded to an initial report of a potential active shooter at the Baymont Inn on North Chadam Lane. City and County Law Enforcement Agencies responded to the report, and after thoroughly clearing the building, determined that there was no threat to public safety. (Click photo for larger view.)

The City of Muncie will invest about $600,000 in upgrades to Westside Park that will include a skatepark that the public is invited to help design. The city awarded the design of planned changes to Rundell Ernstberger Associates (REA) and Hunger Skateparks following a request for proposals. Construction is expected to begin in 2023, contingent on successful completion of a fundraising campaign of $80,000 from the public.

In a letter published by MuncieJournal.com, Muncie Downtown Development Partnership President Will Issacs thanked the community for supporting the Fire Up Downtown event that was held on August 6th. In his letter, Isaacs said over 140 people volunteered their time to provide an enjoyable experience for the public and that people from as far away as France and Finland attended the event.

A police officer in Richmond is in bad shape at a hospital in Ohio after being shot during a traffic stop Wednesday evening. Officer Seara Burton was allegedly shot by 47-year-old Philip Lee of Richmond. Police said Burton’s K-P partner indicated the possible presence of narcotics on Lee’s moped. Chief Michael Britt said Burton was taken to Miami Valley Hospital in Dayton, Ohio, in “very critical condition, fighting for her life.”

The Starpress reports U.S. Senators Todd Young and Mike Braun, who received $60,000 since 2018 from executives, employees and the political action committee of insulin maker Eli Lilly and Co., voted to kill a proposal to cap the price of insulin to $35 a month for many patients. Young and Braun were among the 43 Republicans who voted to take the proposal out of the Democrat’s sweeping bill to address inflation and climate change — making it three votes short of the 60 votes needed to advance. The legislation still included a $35 insulin monthly limit for people on Medicare.

The Cardinal Greenway will close out its 2022 Summer Series with the Cardinal Walk  to be held on Sept. 10th. The event features 5k and 10k routes in Muncie and Marion. The Cardinal Walk is a non-competitive event for people of all ages and abilities with a focus on family fun. To learn more visit cardinalgreenways.org

Inflation is down, according to the latest Consumer Price Index report. However, that’s not a sign of a healthy economy, according to a Hoosier economist. Dr. Matt Will, a financial economist at the University of Indianapolis, says if you read down, the very first sentence in the report from the Labor Department, is food is up 13-percent annualized and housing is up 6-percent annualized. Dr. Will says the report shows that the economy is basically where it was at when the economic sanctions against Russia began, shortly after the county’s invasion of Ukraine.

The Muncie Civic Theater will be presenting the Disney Classic, “Beauty and the Best” from August 12th to Sept 4. Thursday, Friday, and Saturday shows are at 7:30pm and the Sunday Matinees are at 2:30pm. Visit munciecivic.org for ticket information.

The Muncie Community School’s school board has approved a proposal from Muncie Central High School principal Chris Walker to move Central HS to an Honors Graduate policy beginning in 2026. The Student Advisory Council also played a major role in developing the proposal.  The move is expected to  incentivize students to take courses offering the best benefit rather than chasing grades.

The Muncie Three Trails Music Series continues this weekend as the Canadian folk music duo The Small Glories appear on the the Canan Commons stage.  The concert is free and will take place on Saturday, August 13th. Flatland Harmony Experiment will open the show at 7pm.

WISH-TV reports the basketball coach at Beech Grove High School, in Indianapolis was arrested Monday by the Henry County Sheriff’s Department for dealing and possessing cocaine. Micahel Renfro Jr., faces charges of dealing cocaine between 1 and 5 grams, possession of cocaine, operating a vehicle while intoxicated and endangering a person, and public intoxication. Renfro has been suspended by Beech Grove City Schools pending further investigation.

Shoka Griffin is the recipient of the 2022 Muncie Central High School Alumni Association scholarship. He will attend Ball State University where he will play football and plans to major in sports management and criminal justice. Shoka has served as a role model to many younger students,” wrote Dr. Lee Ann Kwiatkowski, director of public education and chief executive office of the Muncie Community Schools, in her letter of support.