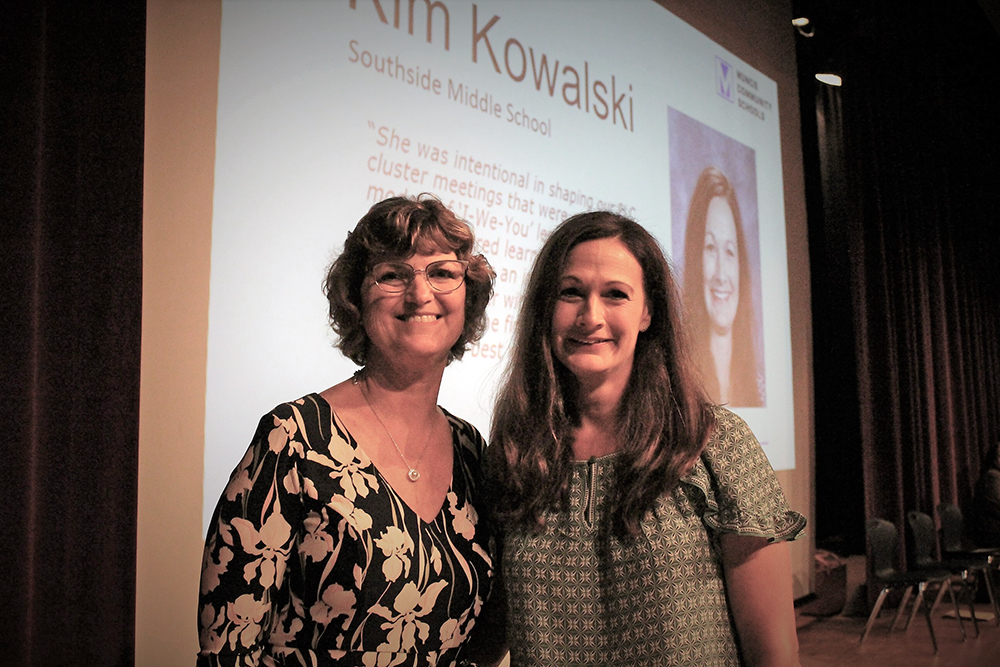 The new school year begins today for Muncie Community Schools. Residents are asked to watch out for students as they prepare to return to their classrooms. Yesterday, Kira Zick and Kim Kowalski were selected as Muncie Community Schools’ primary and secondary Teachers of the Year, respectively, for the 2021-22 school year. The two were honored during an employee gathering at Central High School.

Additional news briefs are below…

An accident involving a total of 11 vehicles, including a semi-truck hauling flammable liquids, shut down Interstate 69 in Madison County for hours on Sunday and sent four people to the hospital. The crash happened at around 6 p.m. at the 227-mile marker between Rangeline and Scatterfield roads about one mile north of Anderson. All lanes of I-69 northbound were closed immediately following the crash according to a WTHR report. Around 11:30 p.m., INDOT said all lanes of I-69 had reopened.

A free medical clinic, aimed at helping people who struggle to afford basic health care, is being organized at the Muncie Mission and is expected to open in October. The StarPress reports the medical staff of Muncie Mission Free Medical Clinic is headed by a physician who retired from his family practice in Muncie and New Castle.

INDOT has cancelled its proposed blocking of the crossover and left turns at the Muncie Bypass and Riggin Road. INDOT listened to criticism from local residents about the project and decided it would not move forward with the proposed modifications.

Members of Fraternal Order of Police Lodge 87 from the Muncie, Ball State, Yorktown, Eaton, and Indiana Excise Police departments attended the funeral of fallen Elwood officer Noah Shahnavaz. Hundreds of officers from all over the country came to show support. The community also came out in large numbers and lined the road to show support.

Applications for Muncie Sanitary District’s “Fall Cleanup Day” are due on August 15th. Fall cleanup days will be September 10th, 17th, and 24th. Neighborhoods requesting a truck must have at least six people who will definitely participate in the cleanup, rain, or shine. At least two of these people must be at the truck site/starting point by 8:00 a.m. to meet the truck.

The United States Postal Service is hosting a job fair to fill immediate openings in Muncie and surrounding areas. Immediate positions are available with a starting pay up to $19.06/hr. The job fair is today. From 10:00 a.m. to 2:00 p.m. at the Muncie Post Office at 501 W Memorial St.

Kayla Patterson will be representing the East Central Indiana Fellowship of Christian Athletes at the 2023 Miss America’s Outstanding Teen Competition. The contest will be held August 10-12 in Dallas Texas.

The owners of an adult baby store in Noblesville say they are a medical supply store. The city says they are a sex shop. The store is now under the microscope for possible violations of zoning guidelines. The store sells adult baby supplies. The store owner, Ryan Polokoff, says his store is a medical supply store that sells adult diapers and related incontinence supplies, as well as costumes for age-play, as well as any type of events where people want to participate in age regression. Some see the store as a supply store for those who get sexually aroused from child-like role-playing. The store owner is suing the city of Noblesville to prevent them from evicting his store from its current location.

Lt. Gov. Suzanne Crouch and the Board of Directors for the Indiana Housing and Community Development Authority have announced six developments have received $130 million in tax credits and bond awards for affordable housing. The funding is used to incentivize private developers to fund the acquisition, rehabilitation and construction of affordable housing communities throughout Indiana. Locally, Hoosier Woods in Anderson, will be developed by TWG Development and will receive $889,061 Low-Income Housing Tax Credits annually for 10 years to preserve 204 units of multifamily units.

The Muncie StarPress reports a sentencing hearing for Rodney Barber has been rescheduled for September 6. Barber is a former Delaware County contractor who was set to plead guilty to a charge of fraud and be sentenced on July 27th, but the judge in his case granted a request for a continuance. Barber was charged in a federal investigation of corruption in Muncie city government.

The former Pine Lakes Fishing Resort in Pendleton right off Interstate 69 is now Mystic Waters Family Campground. The new owners are working to renovate and improve the campground.

According to IPR, access to Interstate 465 from Binford Boulevard on the Indianapolis north side will be restricted beginning this week. The Indiana Department of Transportation said the northbound Binford Boulevard on-ramp to westbound I-465 is scheduled to close this morning. The ramp will remain closed for about three years to make room for construction work and improve traffic flow in the area during the Clear Path 465 project.

Muncie Folk, a local harm reduction initiative, continues to distribute naloxone through placement of additional “NaloxBoxes” in the Muncie community. Naloxboxes are currently located in the Old West End neighborhood, the Thomas Park/Avondale neighborhoods, and the East Central neighborhood area. Three Naloxboxes have been installed with another one coming soon. The boxes are restocked twice daily.