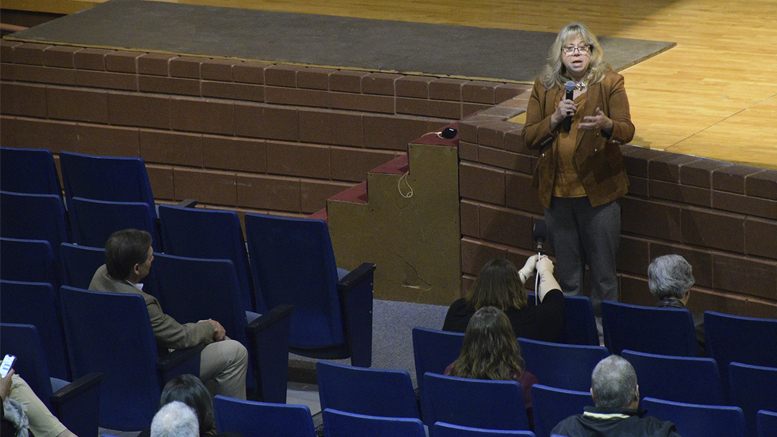 Dr. Lynn Witty is pictured speaking during the announcement of a grant from “Mental Health America Indiana” to combat addiction in Delaware County. Photo by Mike Rhodes

Nikki Grigsby, former administrator of the Muncie Sanitary District, was sentenced yesterday to one year in federal prisonfor her participation in a bid-rigging conspiracy. Grigsby was sentenced by U.S. District Court Judge James Sweeney II after she pleaded guilty to conspiracy to commit wire fraud. Assistant U.S. Attorney Tiffany Preston had recommended a two-year sentence according to the StarPress. Grigsby was also ordered to pay the Muncie Sanitary District $370,556.99 in restitution for money lost through the bid-rigging.

Should children be allowed to pursue gender reassignment surgeries and therapies? Senator Mike Braun discussed that question in a Senate hearing Wednesday. Health and Human Services has been rolling out new guidance and information for people to follow when it comes to younger people pursuing a sex change. The information caught the attention of Sen. Braun, who finds it problematic. Braun says the government should not be pushing a person toward irreversible sex change therapy. He says we are navigating into territory we never have before as a government.

After the last voting machine’s votes were tabulated, this year’s primary election in Delaware County included a total of 10,714 people who cast a ballot. That’s 13.7% of the county’s registered voters.

Muncie police are seeking the public’s assistance in identifying a man who held up a Village pantry on South Macedonia Avenue on April 4.  The armed man was described as being abut 6 feet tall, with a slim to medium build, wearing a black hooded sweatshirt with an image of Marilyn Monroe on the front. Tips can be provided anonymously by calling Crime Stoppers at 765-286-4050.

Tickets for the 11th annual Rialzo are officially sold out. The annual charity gala held by Meridian Health Services is one of the most popular events in Muncie. Although tickets are currently sold out, there IS a ticket waitlist and you may get lucky obtaining tickets. Go to meridianHS.org for more information about the ticket waitlist. This year’s Kentucky Derby themed gala will be held at Ball State’s new Scheumann Family Practice Facility on May 14th.

The Marion County Prosecutor’s Office has filed charges against seven people for their roles in five different Indianapolis homicides. Marion County prosecutor Ryan Mears says the use of forensic firearm examinations has positively impacted the office’s ability to prosecute cases and hold shooters accountable. Since January 2022, the prosecutor’s office has resolved 22 murder cases with a 90% conviction rate.”

WTHR reports for the time being, Anderson public schools won’t be using its controversial Indian mascot after the chief of the Delaware Tribe of Indians said a school leader has promised to bring the issue to the school board. That action could end up ending the use of the mascot altogether.

Brian DeRome is the Robotics coach at Southside Middle School. The second-year Industrial Technology teacher has a background in robotics and he started the school’s robotics program last year. Now his teams are two-for-two in qualifying for the VEX Robotics World Championships. This year’s squad is headed to Dallas this weekend to compete. The championships will be live-streamed, and you’ll find the stream link below: Anyone who wants to watch the championships livestream can visit https://www.vexworlds.tv/#/?channel=vekofbxmpfcyjivcicwm.

(Southside’s teams are listed as 91111A in the IQ MS Opportunity Division and 91111B in the IQ MS Math Division.)

Read more about this story at munciejournal.com

The Education Department at Cornerstone Center for the Arts, is offering two sessions of Summer Camp for youth, age 7 to 12 this June and July.  June Camp will run from June 13 to June 17 and July Camp will take place from July 11 to July 15. This year’s themes will be “Around the World in 80 Days” and “Monsters, Myths, and Fantasy”.  To register and learn more visit cornerstonearts.org

The Muncie Mission has received the “Spirit of the Silver Lining” Award from the West Bend Independent Agent’s fund. The award recognizes the hard work of independent insurance agents and the non-profit organizations they support in delivering help and hope to those in need.

Ball State University will have its spring commencement ceremonies this Saturday, May 7th. James Fallows and Deborah Fallows, co-authors of the 2018 New York Times bestseller “Our Towns: A 100,000-Mile Journey into the Heart of America,” will be speakers at the main ceremony, which begins at 10 a.m. on the Quad. Ball State President Geoffrey S. Mearns will also speak.

The Herald Bulletin reports NASCAR veteran driver and South Bend native Ryan Newman has submitted an entry to race in the 74th annual Lucas Oil Little 500 at Anderson Speedway. His car for the Little 500 will carry the name of Anna Van Acker who died in 2021 and was a registered organ donor. Newman is partnering with the Indiana Donor Network and the Driven2Save Lives Campaign.

May is “Older American’s Month. Muncie’s LifeStream Services will be hosting events all month, capping off with their “Aging Well Conference” on June 2nd at the Horizon Convention Center. The conference will feature the hosts of HGTV’s “Good Bones” television show.  The Good Bones hosts own an Indianapolis-based home renovation business with a mission to revitalize their favorite neighborhoods one house at a time. For more information on all the events this month, visit lifestreaminc.org

The Alexandria City Council is weighing options for strengthening its ordinance regarding dog bites after resident Jane Murray filed a lawsuit against her neighbor. Murray says she was attacked while walking her family dog. The Herald Bulletin reports Stephen Smith and his dog—a pit bull—have been the subject of numerous complaints by residents.

The Anderson Board of Zoning Appeals has approved two special exceptions for new business developments. The Herald Bulletin reports the exceptions are for  the business “Unlimited Car Sales” at the corner of 18th Street and East Lynn St. — and for a new truck terminal for 49 trucks near the 5900 block of Dr. Martin Luther King Jr. Boulevard.

It’s going to be a VERY wet day today. Take that umbrella and put the galoshes on the kiddos.—Mike Rhodes