Judge sets prisoner free.  Citing successful completion of the Recovery While Incarcerated (RWI) Program, had no write-ups, and the Defendant’s first felony conviction, Judge Kimberly Dowling issued an order releasing convicted drug dealer Marco Contreras-Desilva over the adamant objections of prosecutors. He was originally sentenced after admitting to selling drugs in Muncie to BSU students, and dealing Ecstasy, profiting around $6,000 every month, for pure financial gain and not to support an addiction.  Court documents provided by the Delaware County Prosecutor’s office indicate the remainder of the Defendant’s six (6) year executed sentence shall be modified to electronic home detention through Delaware County Community Corrections until October 10, 2023.

More than 200 police agencies across Indiana will be taking part of the state’s Stop Arm Violation Enforcement program.  There is only one instance where you don’t have to stop for a school bus — when you are driving towards it on a four-lane highway, and there is grass or concrete barrier dividing the highway.

Indiana Senators SPLIT.   Todd Young (R-Ind.) was one of the Republican Senators who voted in favor to begin debate on the Senate’s bipartisan infrastructure bill: Senator Mike Braun, also a Republican, voted against the measure.

Even though the guidance from CDC has changed, there are NO changes to the Ball State plan for masks and vax

President Mearns, from yesterday in the WLBC Zoom Room with Steve Lindell. 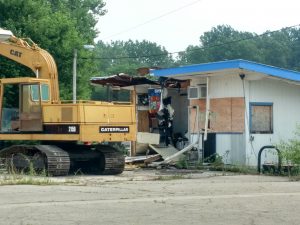 The process of voting in our Country is being debated.  We wondered how new Indiana Secretary of State Holly Sullivan looks at the situation

We learned during yesterday’s Zoom Room interview that she came from the private sector, and you’ll hear her reason for doing this job on our Monday morning news.