Only 58% of their goal.   As we have reported previously, the Salvation Army’s fund raising was hampered by reduced donations as well as fewer bell-ringers at red kettle locations.  WLBC’s Steve Lindell asked Major Mark Litherland, of the Muncie location how their services will be impacted, and he stated, “What we might be forced to do is, less. While keeping our Social Service programs going we might not be able to help with the quantity of assistance that we have been used to.” Mail-appeals are still underway, but they will not likely make up for that large of a gap.

Have you seen the new #COVID19 vaccine dashboard?  Updated on Wednesdays, you can check the status of vaccine distribution throughout the state.  http://coronavirus.in.gov/vaccine.

Yesterday, ESPN+ aired its latest episode of “Peyton’s Places,” a football-themed documentary hosted by Peyton Manning and produced by the NFL Network.  This episode featured 1969 Ball State graduate and television legend David Letterman, and was filmed at various locations around the Ball State campus — at the suggestion of Letterman — in October. 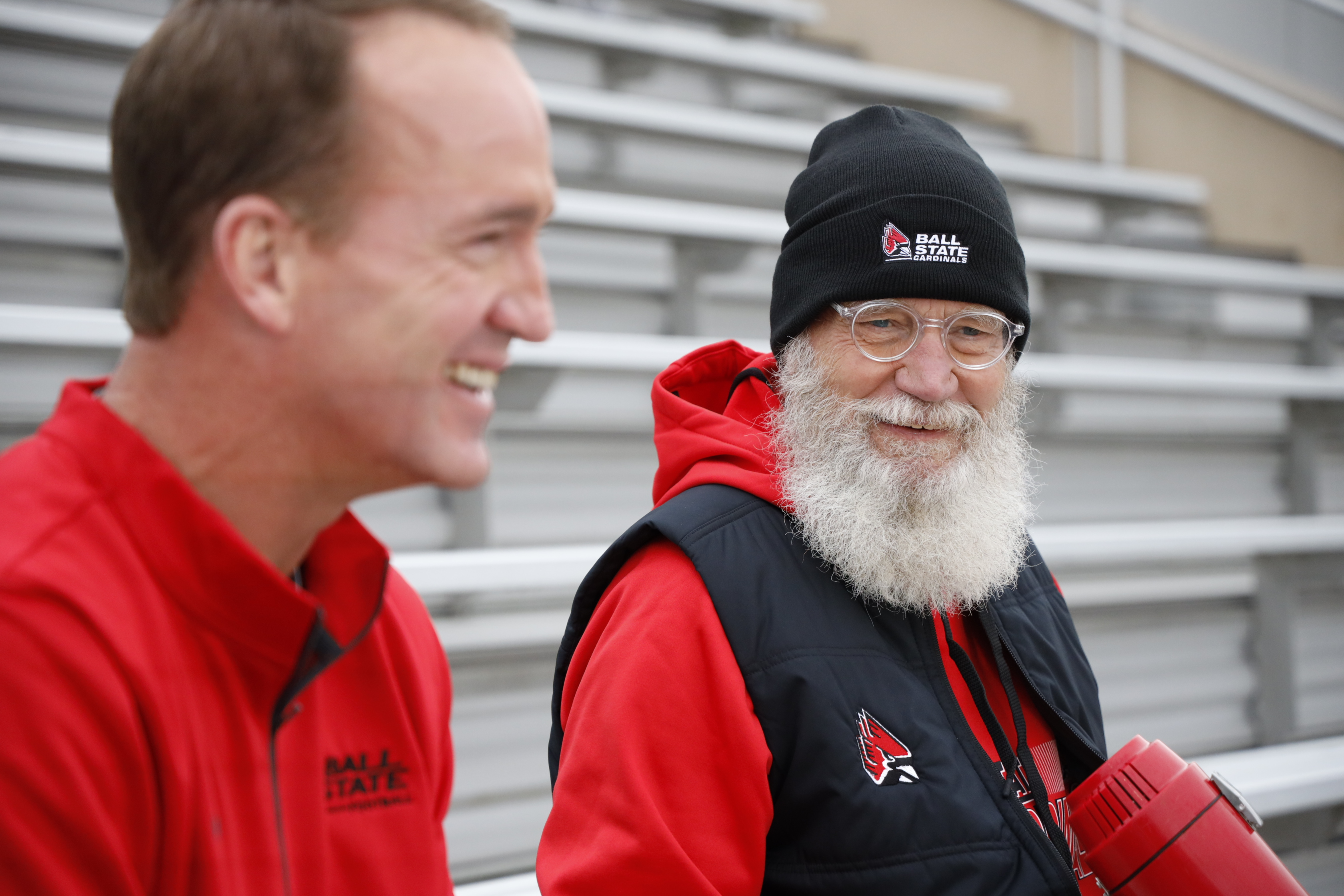 Ball State President Geoffrey S. Mearns, in a note to students, faculty, staff and alumni, announced that BSU, in collaboration with ESPN, is hosting a virtual watch party for this “Peyton’s Places” episode on January 15.  This event will offer free, one-time access for students, alumni, employees, media members and interested members of the Ball State campus community.   Information about accessing the virtual watch party for this episode of “Peyton’s Places” will be distributed closer to the event.

A New Year’s Eve fire on Muncie’s southwest side has badly damaged a house and killed at least two family pets.  Firefighters were called to the home, in the 3800 block of West 31st Street, just before 6 p.m.  The owners of the house were not home when the fire broke out. A neighbor entered the house to try and rescue the family’s pets, but the smoke made it impossible.

New year, same exact divisive rhetoric.  The Indiana Democratic party issued several statements, moments after Gov. Holcomb’s weekly press briefing last week – with characterizations that he “Doesn’t Want to “Personalize” COVID-19.”  Holcomb clearly stated that Indiana was “on fire” when data showed the increases over the past 30 days or so, and has been criticized for not taking more aggressive measures like some other states – with THOSE states also been criticized for being too restrictive.  The Indiana Dems also took issue with Holcomb referring to his weekly press conferences as a TV “show,” as many were NOT offended by that particular word at all.

After an investigation by the U.S. Department of Labor’s Wage and Hour Division (WHD), the City of Tipton, Indiana, paid $91,924 in back wages to 15 firefighters for violations of the overtime requirements of the Fair Labor Standards Act (FLSA).

A very vague Facebook post last week from Muncie’s Prairie Creek, citing “calls with some misinformation that has been circulating:” the post did not specify the source of the misinformation.  Due to maintenance and damage cost at its current location, the handicap pier is being moved to the north cove.  In the new gated area, visitors are more than welcome. The person you are visiting will need to meet you at the gate and scan their card to let you in. Also, no logbook for visitors will be kept – campers and dock holders are responsible for their guest and their actions.

All of the holidays have now past, and the needs are still there – Second Harvest Food Bank of ECI Announces Tailgate Food Distribution Events for this week: Tuesday at Five Points Mall in Marion.  Wednesday at the Jay County Fairgrounds.  Thursday at Muncie Mall.  Friday in the Old K-Mart Parking Lot in Anderson – all beginning at 10 a.m.  Distribution is while supplies last. All are welcome, regardless of home county or reason for need. No IDs, Proof of Address or Income required.

This week in Indiana history, in 1904 Irish poet and dramatist William Butler Yeats was the guest speaker at Butler University.  He spoke on the topic, “The Theater and What It Might Be.”  He said modern audiences demand expensive stage settings but care little for the worth of the play.

Today could be the day.  Banks and credit unions sent advisories out last week, that today could be your $600-Day.  The first economic impact payments will be posted to the same accounts as were set up with the spring payment.  The best way to see if your payment has been applied to your account is to login into online banking.  We are told that financial institutions will not be able to anticipate when your payment will be applied.

As we reported last week, the state elevated Madison County to RED status.  Anderson Community Schools will remain virtual this week, and continue to monitor.  ACS has one of Indiana’s longest virtual schooling steaks – starting even before the new Red status.

An update – who shot who?  A 17-year-old has been arrested in connection to a Grant County shooting that killed a woman and injured a man.  Officers were called to a home in Upland, just south of Taylor University.   There, they found Khloe Martin and Peyton Mills, both 18 years old, with gunshot wounds. Martin died while Mills was taken to the hospital.   Meanwhile, a 17-year-old boy was taken into custody for unrelated charges. A probable cause was developed to charge the 17-year-old in relation to the shooting.   The investigation is ongoing. Anyone with information is asked to contact the Grant County Sheriff’s Office or Crime Stoppers.

A very vague Facebook post last week from Muncie’s Prairie Creek, citing “calls with some misinformation that has been circulating:” the post did not specify the source of the misinformation.   The post stated that “during the 2020 season, we held multiple meetings with seasonal campers of Prairie Creek…Installing gates was a top request.”   Due to the increased criminal and unsavory activity by those not camping in the campground, installing gates is the most cost-effective solution available.

A Gas City man died on Wednesday following an accident at a General Motors facility in Marion, Indiana. According to a news release by the Marion Police Department, police were called to the stamping and sheet metal plant around 7:06 a.m. on Wednesday. Officers were told 57-year-old Mark McKnight had somehow died.

On Thursday, Rep-Elect Victoria Spartz (IN-05) released the following:  “After a very deliberate interview process, I have selected Renee Hudson to serve as my Chief of Staff.”  Hudson has previously served as Chief of Staff to three members of Congress.

Aldo Andretti has died at the age of 80. He was the identical twin brother of IndyCar legend Mario Andretti.   A Mass of Christian Burial will be held on Tuesday, Jan. 5 at noon, in Brownsburg.