Can those BSU jobs be restored?  Our Steve Lindell asked President Mearns that question last week – referencing the $10 million appropriation that was cut by the State Legislature

They are not the first city to do so, but one of the latest – Marion Mayor Jess Alumbaugh announced Friday he is vetoing three ordinances passed by city council intended to distribute hazard pay to front line workers, claiming council’s attempt to direct how CARES Act money was spent was illegal for several reasons, according to the Chronicle Tribune.

Gov. Holcomb spoke to Woof Boom Radio news Friday morning, and we noted that he oftentimes uses sports words and analogies when speaking

By the way, as he traveled the state this weekend, he also made a stop at Ivanhoe’s in Upland, as indicated by a photo on Twitter – when he ran into some students from the Erskine Green Center on a visit.

Two people were killed, and a third person is in the hospital, after they were hit by a car in South Bend early Saturday morning. Rob Connett reports.

Incumbent state lawmaker Terri Austin is running on her record for reelection for District 36,  against Republican challenger Kyle Pierce, a candidate making his first attempt at elected office.  Austin, a Democrat, is currently an assistant floor leader in the Indiana House.  Pierce works at the Ball State University Foundation and told the Herald Bulletin he recently moved into Anderson.

Cowan, Wapahani and Yorktown are all semi state bound in volleyball.  The last time this happened was in 2012, when all three made the state championship, with Cowan and Wapahani went on to win state championships, according to the Muncie newspaper.

On Friday, the Pittsburgh Steelers announced that they have signed former Ball State football player Ray Wilborn to their practice squad. At BSU, Wilborn started all 24 of his games with the Cardinals playing both linebacker and safety.

The annual “Lowe’s Days” event  is tomorrow and Wednesday, and will involve close to 40 Lowe’s volunteers, who will be converging into the 8twelve Coalition target area of Muncie beginning at 9:00 a.m. both days.  They will work on projects at the Maring-Hunt Public Library, Ross Community Center, a Habitat build site, Muncie Mission, Jefferson Street Pocket Park, and down South Walnut Street.

Nothing new – but more reminders.   White House Coronavirus Response Coordinator, Dr. Deborah Birx, says it’s all about ’empowerment’ when it comes to the recent spike in coronavirus cases here in Indiana.  Americans know at this point to wear a mask and wash their hands. Birx says the hard part is getting everyone to do it.  Another element to keeping the spread of the virus to a minimum is consistent testing. As Dr. Birx and her team has discovered after touring the country, she says they learned that weekly testing within universities has truly made a difference in their numbers. The idea behind more testing, is to help those who are asymptomatic from spreading the virus.

When the State Department of Health leader contracted COVID, we asked the Governor, did that “made it even more real” to him, and his staff

An Indiana University student was killed by a stray bullet in New York City early Saturday morning.  Police say Ethan Williams, 20, of Indianapolis, was sitting with a group of friends in Brooklyn when several shots were fired around 2:30 a.m. Williams was shot in the chest. He was rushed to a hospital, where he died.

In Anderson Saturday, the Coats of Caring saw hundreds of people came through the line to pick up items they had pre-ordered. The event, though forced by the coronavirus pandemic to change its format, was never in serious jeopardy of being pulled from its traditional late October spot on the calendar, organizers told the Herald Bulletin.

Would you ever drink cow poo? Rob Connett reports.

High School Football:  celebrations continue for Delta, Monroe Central, New Castle and Yorktown after opening round victories – now advancing to sectional semifinals this Friday: our Woof Boom Radio plan is to carry the Monroe Central game on The MSS, and the Lapel hosting Eastern game on the HBU – pending approval of Lapel, due to press box restrictions.

Friday, when we spoke to Gov. Holcomb, we asked if he was sick and tired of having to do these weekly briefings every single Wednesday

He’ll do another event this Wednesday, at 2:30 pm. 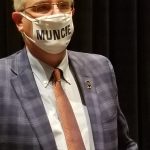