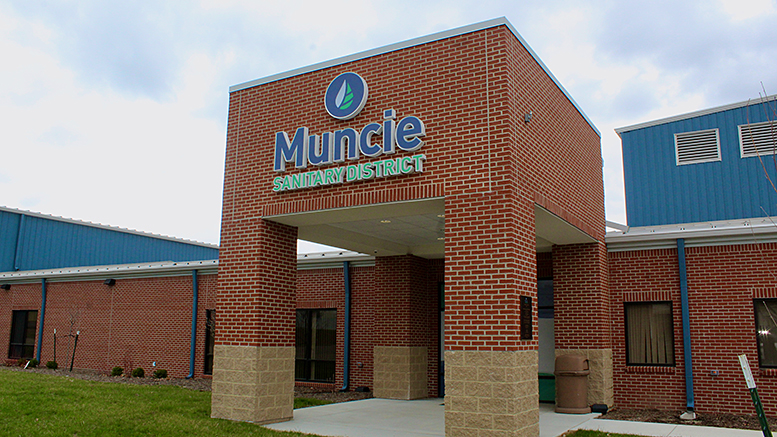 The Muncie Sanitary District is the recipient of the largest 2023 grant award from the Indiana Department of Environmental Management’s  Recycling Market Development Board. The Recycling Market Development Board unanimously approved and fully funded MSD’s grant proposal “Do the Blue: Without the Blue Bags” for $468,798.00.  Visit munciejournal.com for more on this story.

A Randolph County man has been sentenced to 20 years in federal prison for a child pornography conviction. 47 year old Lance Parsons of Lynn pleaded guilty to distribution and receipt of child sexual abuse material in U.S. District Court in Indianapolis. Parsons was also ordered to pay $10,000 to the juvenile he was most recently accused of assaulting according to the Star Press.

The Star Press reports Muncie Police Department Officer Chase Winkle has officially been removed from the police department after the Muncie Police Merit Commission voted unanimously to remove him.  Winkle had been suspended without pay since early 2020, when he was first indicted on federal charges that stemmed from allegations he had physically abused arrestees. Last week, Winkle signed an agreement to plead guilty to 11 counts stemming from those assaults and the related filing of false police reports.

At the November meeting of the Muncie Redevelopment Commission, Mayor Dan Ridenour said a Community Foundation Fund has been created to assist in additional funding for a Muncie skate park. Ridenour said he hoped the skate park could begin being constructed in the spring of 2023.

New workout equipment was presented to fallen Officer Seara Burton’s family and Richmond Police department officers Friday at the RPD Fire and Police Training Center. The equipment was donated from the proceeds of an Indiana Bourbon and Old 55 Distillery fundraiser.  Special edition bottles of Indiana produced bourbon were sold.  Burton’s family wanted her portion of the fundraiser to involve something Seara was passionate about, so ultimately the  Rogue Fitness brand equipment was a great option. Burton loved the gym and her fellow officers, so the equipment embodies both of those things. You can see photos of the gear on the RPD facebook page.

A new Indiana law now limits how many e-learning days schools can use. School districts will only have three days all year long to use for virtual learning. Each district will adapt to the new law in different ways. Some districts may use inclement weather for e-learning days. Some superintendents say they fully anticipate having to add on days at the end of the year, since they don’t believe three is enough and Mother Nature may not be as forgiving this winter.

Muncie police are investigating a homicide that took place on the city’s east side. The fatal shooting was reported at Willard and Blaine streets, in the Industry neighborhood. The victim was identified as 26 year old Sentarian Kieran Stockett of Muncie. Stockett was “down in the road” when emergency responders arrived. Stockett was pronounced dead at the scene and the investigation is ongoing.

Thanksgiving is only a few days away, and with it, the Macy’s Thanksgiving Day Parade. This year, you might see some familiar faces in the lineup. Carmel High School’s Marching Greyhounds are one of the bands that will be performing in Thursday’s parade. Festivities will start at 8:45 a.m. in New York City.

Fox 59 reports a man walked into an Anderson PetSmart store with a gun and robbed it. According to the Anderson Police Department, a man entered the store, displayed the handle of a gun and demanded money. He left with cash from the store’s register. Police officers set up a perimeter and searched the area with a K9, but the robbery remains under investigation.

At this month’s Muncie Redevelopment commission meeting, Mayor Dan Ridenour discussed a new development project that might be started at the corner of Tillotson Avenue and Memorial drive. The project would consist of a 276 unit apartment complex. The development, tentatively called “Tillotson Commons”, would be near a planned new city park, currently called “Tillpond”, that would feature a fishing lake and walking trails.

A Muncie woman charged in connection with a fatal overdose will not stand trial next month as planned. The Star Press reports 42 year old Holly Jeannette Terry is charged with dealing in a controlled substance resulting in death, a Level 1 felony carrying up to 40 years in prison. Her trial had been set for Dec. 12th, but Delaware Circuit Court 1 Judge Marianne Vorhees agreed to postpone it. A new trial date has not yet been scheduled.

The outdoor season of the Farmers Market at Minnetrista in Muncie has wrapped up and moved indoors for the winter months. The first indoor Market kicked off on Saturday. The hours for the indoor market are from 9 a.m.–Noon through April. Visit munciejournal.com for the specific dates.

The Indiana Department of Veterans Affairs is now running its holiday program for veterans in need. The Military Family Relief Fund Operation Holiday program will allow selected veterans to get $300 for each dependent in their household, as well as $200 for a holiday meal. If you are a veteran or active service member and would like to benefit from this program, you can apply online by visiting in.gov and searching for the “Operation Holiday Program.”

An investigation prompted by the National Center for Missing and Exploited Children has resulted in the filing of felony charges against a Hartford City man. Star Press reports 27 year old Michael Vaughn Winters is charged in Blackford Circuit Court with promotion of sexual trafficking of a younger child, conspiracy to commit kidnapping, vicarious sexual gratification, inappropriate communication with a child and four counts of child solicitation. He is being held in the Blackford County jail under a $5,000 cash bond.

Christmas at the Zoo has kicked off at the Indianapolis Zoo. The holiday favorite will run until December 30th. Santa might even make an appearance. Learn more and get tickets online at indianapoliszoo.com.

The Indianapolis Colts are partnering with other businesses to help 2,000 Hoosier families. This is the team’s 10th annual “Horseshoe Helpings” event. Here, Colts players and Cheerleaders – as well as mascot Blue – will work with volunteers to give away Thanksgiving meals at Lucas Oil Stadium. Families who have been pre-selected to receive meals can do so between 9 a.m. and noon Tuesday. 10 local churches will also benefit from this event. Everyone participating in this program has been pre-selected.

Muncie-based First Merchants Bank has been named one of the Best Banks in the nation to work for by The American Banker, a New York-based trade publication. Employees answered a confidential 77-question employee engagement and satisfaction survey to help assess their workplace experience and culture. Winners were then determined by the American Banker based on the size of the company and an analysis of the survey answers.