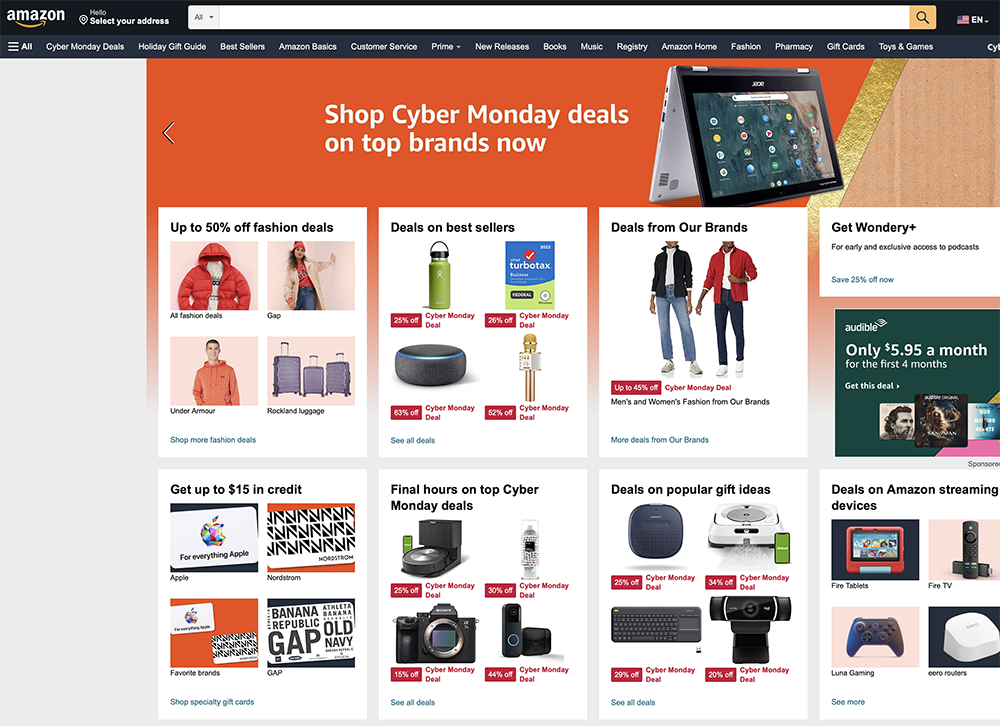 The three day shopping triple-threat began with Black Friday…then Small Business Saturday…and today…it’s Cyber Monday where all the sales emphasis is on online shopping. This is the 17th year of Cyber Monday, having first started on November 28, 2005.  The Cyber Monday of 2020 was the biggest online shopping day in U.S. history with a total of $10.7 billion in online spending.

Local Prosecutor Eric Hoffman says an Indianapolis attorney needs to stay on the case of a man accused of fatally shooting a Muncie resident, but the defense attorney, Mark Nicholson wants out of the case. Jason De’Andre Harris, 33, is accused of fatally shooting Erik Sparks, a 28-year-old fellow Muncie resident, last Feb. 7. Last week, Nicholson filed a motion asking Judge Thomas Cannon Jr. to allow him to leave the case due to a break-down in the attorney-client relationship. Prosecutor Hoffman then filed an objection to that request. According to the StarPress, Hoffman said a relative of the slaying victim was terminally ill, and that a lengthy delay in the proceedings could prevent that person from seeing the case resolved.

The Delaware County Election Board has reviewed challenged votes and provisional ballots and has now approved a final vote tally for the 2022 general election. The final tally did not alter the results of the election held on November 8th. According to a StarPress report, Delaware County Clerk Rick Spangler said the board’s next task will be to get the county ready for vote centers to be used for the municipal election in 2023.

A Randolph County man was killed last week in a one-vehicle crash. 19 year old Kaden M. Purdin, of Union City, was pronounced dead at the scene of the crash, in the 9500 block of South Arba Pike. The Randolph County Sheriff’s department said Purdin was driving at a high rate of speed when his vehicle left the road, and rolled several times. Purdin was ejected from the vehicle and the investigation will continue.

The Indiana State Police warn of potential package thefts during Cyber Monday shopping. According to the Better Business Bureau, 1 in 3 American’s has had a package stolen at least once. State police recommend watching your tracking numbers so you know when packages will arrive. If you are not home, you can alert your neighbors to pick up your package when it arrives. You can  also consider having your packages delivered to your workplace.

The Polar Express is playing at The Indiana State Museum’s IMAX Theater . The theater will be hosting its “Polar Pajama Parties” starting today. If you attend one of the movie screenings, you can watch the film in IMAX 3D. Kids are encouraged to wear pjs. Also, every adult ticket purchased will earn a free ticket for kids younger than 12 who wear their pajamas to the theater. Learn more at imaxindy.com.

WISH TV reports that a new study suggests mouth bacteria can lead to lethal infections. A buildup of bacteria could connect you to a high risk of cancer, diabetes, heart disease, and Alzheimer’s disease. Study author Dr. Margaret Chen said the study results provide new insight into the diversity and prevalence of harmful microbes in oral infections. If a certain bacterium infects and causes damage in the mouth, it’s very likely that it can be harmful to tissues elsewhere in the body as the infection spreads. The study recommends that you get a routine dental exam and cleaning every six months.

Two people were shot at a Fort Wayne shopping center on Saturday. The Gateway Plaza shopping center was the scene of the shooting. Officers found a male and female shot in the parking lot. Both victims were taken to a local hospital and the incident remains under investigation.

Small business Saturday brought a lot of people downtown over the weekend. Frank Reber, owner of The Caffeinery, told Woof Boom news his coffeeshop had the most visitors he’d ever had. Almost 900 people visited his downtown Walnut Street shop. Reber said that number is a lot for a traditional coffee shop that makes everything manually.

Through Dec. 1, any donations made to the Salvation Army’s touchless giving devices will be automatically tripled, thanks to several anonymous donors. Donors can now give a set amount of $5, $10 or $20 with just a tap of their mobile phone, smart watch, or any credit card set up for contactless payments at the Salvation Army’s TipTap donation sites across central Indiana. Shoppers should look for a Red Kettle and TipTap device during the $45,000 match period.

Did you happen to bag a deer over the holiday? A Hoosier organization dedicated to helping feed those who are less fortunate is asking for your help. Hoosiers Feeding The Hungry says they are hoping to collect enough meat to equal about 1,000 deer this year. Last year they collected enough to equal 770 deer. The organization says one deer can provide up to 200 meals-worth of food. If you donate meat, the organization says it will cover the processing fees. For more information, visit  Hoosiersfeedingthehungry.org

Attorney General Todd Rokita is warning Hoosiers about Cyber Monday shopping scams. A few of Rokita’s tips include: If a product’s price is unbelievably low and sounds to good to be true, it probably is. Be extra cautious when buying from an unfamiliar company. Avoid any online retailer that does not provided information about privacy, terms, or contact details. Hoosiers are encouraged to contact the Attorney Generals office regarding any suspect scams or scam attempts.

A federal jury has awarded a Gary man $25.5 million in his lawsuit alleging that a now-retired police officer violated his civil rights and deprived him of a fair trial in a case involving a 1980 rape and robbery. The jury deliberated for 3 hours before awarding James Hill Junior the $25 million in compensatory damages and $500,000 in punitive damages.

Over the past year, Indiana poultry farmers have donated near 200,000 pounds of poultry products to Hoosiers in need, including eggs, chicken, duck and turkey. The Indiana State Poultry Association and others celebrated the generosity of Indiana poultry farmers at the 75th Indiana State Poultry Recognition event held at the statehouse.  According to the ISDA, the Indiana poultry industry employs more than 12,500 Hoosiers and generates more than $15 billion in total economic activity. Indiana ranks first in duck production, second in egg production and fourth in turkey production in the country.

Ball State University economist Michael Hicks says there is increasing evidence that the U.S. economy might be picking up steam for faster growth. Hicks says predictions are never certain and there are plenty of roadblocks, but the next few decades hold enormous promise. Hicks says the engine of prosperity is education-driven innovation and that Indiana needs to get 10,000 more kids to college each year.

WTHR reports that 7 months after its debut in theaters, “Top Gun Maverick” will soon begin to show up on streaming services. The year’s top film that has made over $1.48 billion worldwide will appear on the Paramount Plus streaming service on December 22nd.

An Anderson mother has been arrested on charges of neglect of a dependent involving her three children. 42 year old Crystal Dawn Winchester of the 2200 block of East County Road 150 South, Anderson, was arrested last week by Madison County Sheriff’s Department deputies. Criminal Magistrate Kevin Eads agreed to appoint a public defender, but noted Winchester works as a nurse with an annual income of more than $72,000— That According to a Herald Bulletin report.

Members of the Anderson Police Department are trying to locate a woman in connection with a shooting incident last week. Police are searching for 37 year old Britney Marling, who is suspected in the shooting of Michael Dees. Dees was shot in the 3000 block of Columbus Avenue. He was transported to a local hospital and later transferred to an Indianapolis hospital, where he’s listed in serious condition according to the Herald Bulletin.

Elwood’s Christmas parade took place on Saturday and event planners say the evening was a success. Christmas Committee member Christy Clark said the event had a huge turnout, the weather was perfect and everything went off without a hitch. Elwood residents can see Santa at 2pm on December 11th.

The James Warner Annual Thanksgiving dinner provided over 1500 thanksgiving dinners to those in need on Thursday. 85 year old James Warner, (who the dinner has recently renamed for,)  has been organizing the dinner for over 30 years. The Anderson police department also assisted with the delivery of meals, delivering 70 to the residents of Longfellow Plaza, according to a Herald Bulletin report.