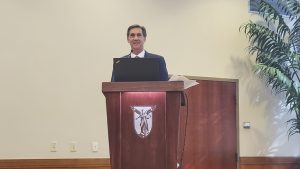 Current Mayor doesn’t TIF (tiff) as often as some others.  Tax Increment Financing, or TIF Districts, have been used more by previous administrations in Muncie as a way to incentivize business development.  Mayor Ridenour cited seven recent examples that he has NOT pursued them…Those were three of the seven examples, and he explained the pros and cons of using TIF – hear that entire segment on This Weekend in Delaware County with Steve Lindell, or LISTEN HERE.

Earlier this week, a hearing was delayed – it was to have set the trial date for 27 year old Alyson Stephen, charged with murder in the 2018 death of her son.   March 21 will be the new hearing date.  She is facing charges of murder and neglect of a dependent resulting in the death of her 23-month-old son, Ryder Stephen.  Her former husband, Jacob Wootton, was sentenced Friday on his guilty plea.

The American Pickers are excited to return to Indiana! They plan to film episodes of The History Channel hit television series throughout your area in May 2022.  AMERICAN PICKERS is a documentary series that explores the fascinating world of antique “picking” on The History Channel.  If you or someone you know has a large, private collection or accumulation of antiques that the Pickers can spend the better part of the day looking through, send us your name, phone number, location, and description of the collection with photos to: americanpickers@cineflix.com or call (646) 493-2184

Though the Alexandria Fire Department doesn’t have any female firefighters, the city’s Board of Works and Safety on Monday voted unanimously in favor of a contract that would double the number of weeks for paid maternity leave from four to eight.

The City of Carmel has awarded 27 local organizations with just under $1.2 million in grants from the City’s 2022 Arts Grant Program. This is the 19th year the City has provided financial support for local arts.  SEE the entire list on our Local News Page below:

The Indy 500 Legends Day Concert will be moving to TCU Amphitheater at White River State Park.  It’s always the Saturday before the Race – this time it’s a May 28 concert with some country favorites.