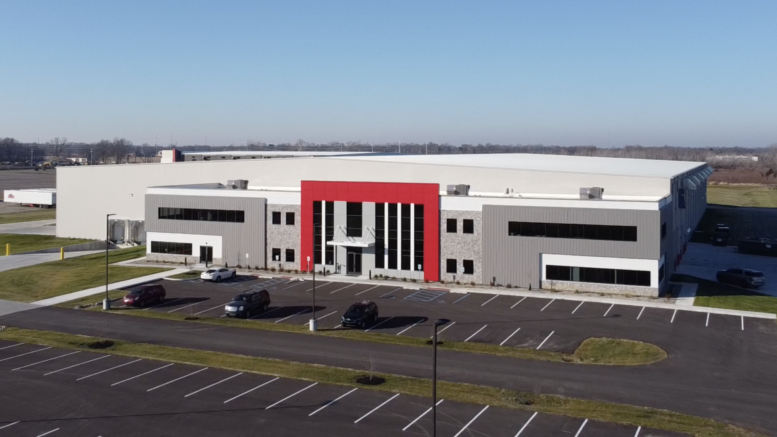 The Inox Market America building in the industria center is very close to completion. A message on the home page of their website indicates the facility will open in the first quarter of 2022 and that applications are now being accepted. Inox is a global leader in the production and distribution of innovative stainless steel solutions and will be one of Muncie’s newest manufacturers. Learn more at  inoxmarketamerica.com

Roche Pharmaceuticals said on Friday that the U.S. Food and Drug Administration (FDA) has granted Emergency Use Authorization to its COVID-19 at-home rapid test that can be used by people as young as 14. The test, which uses a anterior nasal swab sample, is “able to produce accurate, reliable and quick results in as few as 20 minutes” for COVID-19 and all variants of concern, including Omicron.

A Parker City woman faces a felony charge after allegedly making a false accusation of rape. Hanna R. Gilkison, 24, was charged last week in Randolph Superior Court with obstruction of justice, a Level 6 felony carrying up to 30 months in prison. Randolph County sheriff’s deputies reported that Gilkison told them a male acquaintance, armed with a knife, had confronted her outside her home, abducted her and drove her to a camper, where he sexually assaulted her.

A rural Muncie man has been arrested on allegations he entered a female acquaintance’s home,  stole her credit cards and later damaged her car. Nickolas Dametrey Hatfield, 29, of Liberty Township, was arrested on preliminary counts of residential entry, theft, criminal mischief and invasion of privacy.

For more information on these seminars visit www.shaferleadership.com

Local teachers can be a part of the “Madjax Educator Maker in Residence Program.” This year-long program is open to K–12 educators teaching in any subject area. There are a number of benefits to the residency including a $2500 stipend. To learn more about the program  and apply, visit  www. Sustainablemuncie.org/educator

The Muncie Action Plan’s  Annual Community Meeting will take place on January 26th and will be open to the public and also streamed on Facebook Live. Each of MAP’s five task forces will share the work completed during 2021. Learn more at MuncieJournal.com

The Muncie newspaper reports a Muncie woman with two robbery convictions has pleaded guilty to a third after striking a deal with prosecutors. Conyale Denise Ingram, pleaded guilty to robbery resulting in bodily injury, a Level 3 felony carrying up to 16 years in prison, in Delaware Circuit Court 2. Ingram also admitted to being a habitual offender, a status that could add to the length of her sentence.

Two central Indiana police dogs are being credited for helping save the life of an 84-year-old man who had a statewide Silver Alert issued for him on Christmas Day. Allen Jefferis, 84, of Union City, was reported missing by family on Christmas Eve. Bloodhounds from the Hamilton County Sherrif’s office and Boone County Sheriff’s office were enlisted to help attempt to locate Jefferis.  The bloodhounds quickly picked up on his scent and found Jefferis laying on the ground in a wooded area near a creek. He was “clothed, wet and, most importantly, alive,” according to the Boone County Sherriffs office.

Indiana’s secretary of state is stepping aside from her role within the state’s Republican Party. Secretary of State Holli Sullivan has also been the vice chair of the Indiana GOP since 2019. She says she’s stepping down from that role — in order to focus more of her time on her job as Secretary of State. Sullivan was appointed to that job by Governor Eric Holcomb back in March replacing the retiring Connie Lawson.

TODAY IN HISTORY… On December 28, 1958, the Baltimore Colts defeated the New York Giants, 23-17, in overtime in the NFL Championship Game—a back-and-forth thriller that later was billed as “The Greatest Game Ever Played.” The nationally televised championship—the league’s first overtime contest—was watched by 45 million viewers. The star of the game was Colts quarterback and future Hall of Famer Johnny Unitas, who completed 26 of 40 passes for 349 yards.

The mother of missing Anderson teenager Jayda Johnson posted on Facebook Sunday that her daughter has been found in California. The post by Kristen Johnson said her daughter is safe with a police department and that she is flying to California to bring her daughter back to Anderson. Caleb McKnight, public information officer for the Anderson Police Department, said Monday that Jayda Johnson sent a message to her mother that she was okay and had lost her telephone.

The Herald Bulletin’s George Bremer and Rob Hunt and WHBU’s Zach Johnson talk about area boys’ and girls’ basketball teams, including the Daleville boys team that is raising eyebrows with their play in the latest Podcast episode of “Not 4 Print.” Visit the heraldbulletin.com to listen to the podcast.

The annual Best of Madison County contest opened yesterday. You can nominate your favorite local restaurants, businesses, people and entertainment options in all 93 categories at heraldbulletin.com through Jan. 14. Just click on the Best of Madison County headline on the homepage. The five most-nominated in each category will be placed on a ballot for the final round of voting Jan. 15-28 at heraldbulletin.com.