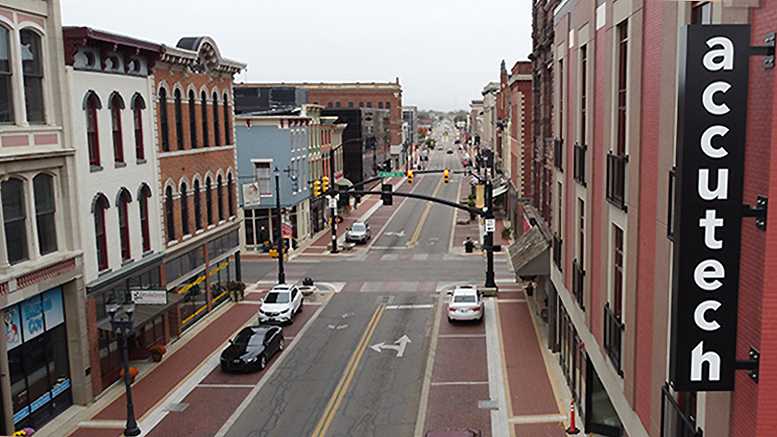 The Accutech building on Walnut Street. Photo by Mike Rhodes

Three historic buildings in downtown Muncie will be home to new businesses. The Clubhouse, which will feature food, drinks and digital golf, is planned to open in January at 115 S. Walnut St. on the first floor of the Accutech building, The Slice/Flight Room, set for 123 S. Walnut St. in a portion of the former Pazols Jewelers building, will offer food and drink and is planned to open later in 2022. And the Vault, 104 E. Main St., will open at a later point in the former Old National Bank building according to the Muncie newspaper.

Finvi, —formerly Ontario Systems—has aquired  Fonative, a communications platform that has served as the underlying technology of Finvi’s Omni Voice platform for over 10 years. The news follows a series of strategic acquisitions throughout 2021 by Finvi – most recently the acquisition of Katabat, a cloud based collection platform.

Noblesville Mayor Chris Jensen was recently awarded the Global Statesman Award by the U.S. Global Leadership Coalition at its annual Tribute Celebration which was held virtually this year.

The Blackford JR SR High School JROTC program is hosting a craft fair this Saturday, December 11th, in the school’s cafeteria. The fair will run from 10 until 2:00. You can enter through door 17 on the south side of the building. There will be plenty of crafts and food for sale and Santa has promised to be available for pictures from 10 until noon.

The CDC reports that 787,000 people in the USA have now died from COVID-19. That’s more than the number who died in the Civil War. 1,100 people are dying every day from the Delta variant. Six states now make up ½ of the country’s hospitalizations and Indiana is one of those 6 states.

A section of Indiana 28 between Delaware St and Mississinewa Ave in Albany will be closed in both directions on December 12th from 3 to 10pm. The road closure is due to the Annual Christmas Street Fair & Parade in Albany.

The Muncie-Delaware County comprehensive plan was presented to the public yesterday. You can view a copy of the 66-page draft plan at www.togetherdm.com.

The Muncie Central High School Alumni Association recognized three distinguished Central graduates at its 2021 annual meeting. Thomas L. Raisor, a 1954 Muncie Central graduate, was honored for his long-time service to the community of Muncie and the MCHS Alumni Association. Two other alumnae were recognized posthumously. They were Ruth Chin, who graduated from Central in 1942, and Ida Husted Harper, who was in the first graduation class of Muncie High School in 1868. http://www.munciejournal.com/2021/11/mchs-alumni-association-recognizes-three-distinguished-graduates/

Muncie Community Schools is working on a new website for the school system. Information will be easier to access, pictures will be higher quality, and the entire revamped site should be rolling out soon at the same web address.

Your political beliefs or lack of proof of a COVID vaccination might keep you from being invited to attend a wedding in 2022.  According to a survey of engaged couples, brides and grooms are particularly picky in who attends their big day in a virus-filled, politically charged world – 1 in 5 said they are not inviting people because of differing political views. It could be worse— 59% said family members they dislike won’t make the cut next year, and 40% will require proof of vaccination.

Christmas on the Green in Yorktown will take place this Saturday, December 11th from 11am to 3pm. There will be live music, activities for the kids and over 30 local artisan and food vendors.

The Muncie Fire Department is accepting applications for Firefighters. You can pick up an application in the Fire Chiefs office or the Human Resource office, both located on the 2nd floor of City Hall or you can go to CityofMuncie.com to download the application and get the list of documents needed to apply.

The Elwood Common Council has approved newly established animal adoption fees for the city’s shelter. Fees will range from $50 for dogs older than 8 adopted by seniors older than 65 to $100 for dogs younger than 6 months adopted by anyone. Fees for cats will range from $15 for felines 6 months to 10 years and $35 for kittens younger then 6 months. A nonrefundable hold fee of $50 will be required for a puppy.