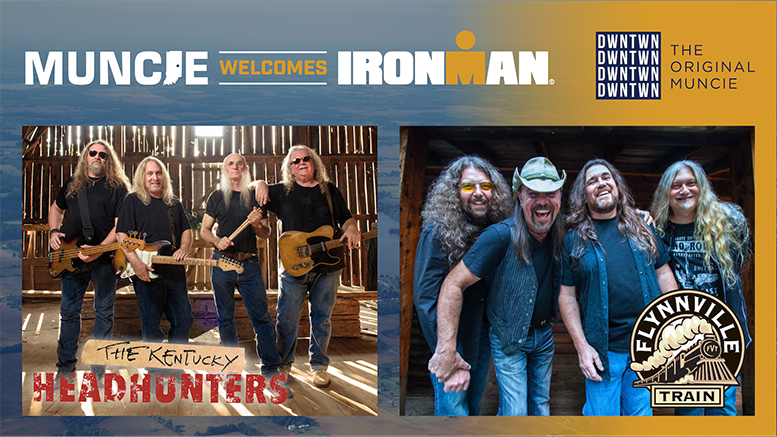 Mark your calendars for Thursday, September 30th. That’s the first of 3 days of festivities surrounding the arrival of IRONMAN to Muncie. The city anticipates 9,000 people will be in town for 3 days that kicks off with a concert by the Kentucky Headhunters and Flynnville Train on Thursday evening. According to the Muncie visitors Bureau the weekend should generate over $5 million from food, beverage, lodging, and transportation. Learn more at downtownmuncie.org

The Community Foundation of Muncie and Delaware County has awarded Thomas Arnold from the Indiana Academy, the Robert P. Bell Creative Teaching Award. The award was established to honor teachers who have gone above and beyond using creativity to enhance learning by their students.

Muncie City Council recently introduced Ordinance 42-dash-21 that, if passed, would create a registry of blighted properties and their owners—allowing city officials to hold derelict property owners accountable for the harm they cause to neighborhoods.

The incredibly popular “Price is Right LIVE” stage show is coming to Emens auditorium on Sunday September 26 at 3:00 PM. Tickets are now available at the Emens box office or online at ticketmaster.com

Two local non-profit agencies with long histories in the Muncie community have come together to provide an added benefit to Muncie Symphony  Orchestra attendees this upcoming season. Hillcroft services Reliable Transit Division will provide free shuttle service for Muncie Symphony Orchestra patrons in need of extra assistance to and from the main parking lots that feed Emens auditorium.

Ronald E. Wright, 23, was arrested in a traffic stop the same day the Muncie Delaware County drug task force served a search warrant at his home in the 5100 block of West Canterbury Drive in Muncie. Wright is accused of selling Xanax bars, in both instances involving more than 28 grams of the drug.

The Board of Directors of Westminster Village has announced the appointment of Mary Jo Crutcher as president and administrator and Dustin Jones as chief financial officer, both effective Oct. 15

You’ve heard and seen the statistics about COVID-19 in the community… we’re all familiar with those… but you’re probably NOT AS familiar with what it’s like for a nurse working with COVID-19 patients all day… every day… over and over and over. MuncieJournal.com shares the story of a Cardiac Intensive Care Nurse at Ball Memorial Hospital as she and her coworkers battle the virus. Read the emotional and powerful story titled “FROM a NURSES EYES”, now on MuncieJournal.com

At halftime of Sunday’s football game, former Indianapolis Colts quarterback and now Pro Football Hall of Famer Peyton Manning received his Hall of Fame ring and so did his former teammate running back Edgerinn James. Both James and Manning gave an encore “thank you” speech to the fans Sunday. They were both inducted into the Hall of Fame last month.

At 10:00am this morning there will be a Veterans Stand Down at the Muncie Delaware County Senior Citizen Center located it 2517 W 8th St in Muncie. A stand down is an event that provides supplies and services to veterans such as food, shelter, clothing and health screenings.

The popular Pumpkin Trail and Glow contest, sponsored by the Muncie Visitors Bureau will be back this year during ArtsWalk on October 7th from 5pm-9pm.

A free flu shot clinic will run 11 a.m.-7 p.m. Oct. 6, at various Meridian Health Services locations throughout Indiana, including four sites in Muncie. During the event, the free flu shots are available to anyone age 6 months or older, and available to everyone regardless of financial status. Attendees do not need to be current patients of Meridian to receive flu shots, and appointments are not necessary for the event.

The Kokomo community held a vigil for a teenager killed in a crash over the weekend. 16-year-old Jonathan McKoon died when he was ejected from a car during a crash early Sunday on state road 22. He was a junior at Taylor high school.

A man accused of child molestation was found not guilty by a jury. Jeremiah Grier, 46, was arrested Jan. 17, 2019, at Anderson Preparatory Academy. In part because of COVID-19 disruptions, he has been in jail for two years and eight months waiting for his trial date. Grier was working as a resource officer, suspension monitor, coach and substitute teacher at the school.

The second annual “Grab ‘n Go Pop-Up Shop” event will take place in the lobby of Madison Park Church of God from 5 to 7:30 p.m. Tuesday, Sept. 28. Residents can drop in to meet the bakers, view the masterpieces, make a donation, and take home favorite desserts.

Indiana State Police Superintendent Douglas G. Carter has announced the promotion of Master Trooper Ron Huff to the rank of Sergeant to serve as a District Squad Leader for the Pendleton Post. Sgt. Huff earned this promotion through written testing and a competitive interview process.

The Indiana Bureau of Motor Vehicles will hold a public hearing on Thursday, September 23rd at 6pm in the Falls Park Community Building in Pendleton. The hearing will cover the proposed consolidation between the Pendleton BMV INTO the Anderson BMV branch.

A woman facing charges of neglect after 94 animals and a child were removed from her home last month has a history of animal hoarding in at least two other states, according to the Herald Bulletin.  Nancy L. Clemmer, 58, 1500 block of Park Avenue, had previously been ordered to abate properties where she lived in Long Beach, California, and Niles, Michigan.

Thousands of people attended Heritage Days Festival in Frankton over the weekend. The festival’s signature parade Saturday morning was a chance for the town’s residents to express appreciation for the service of local members of the military.