It’s about time for a change.  High temperatures in the 90s and heat indexes in the 100s are things you’ve been dealing with lately, but that is about to change. 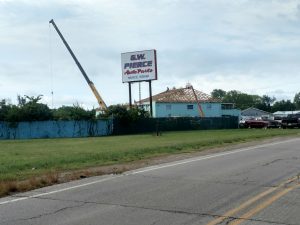 Fort Wayne-based Indiana Michigan Power has donated its former service center building in downtown Hartford City. The utility says the building will now serve as the permanent home for the Hartford City Police Department, as well as a senior citizens center.

The 2021 Yorktown Community Homecoming Parade, in Downtown Yorktown is scheduled for Saturday, September 18, 2021 at 5pm.

Here we go again with gas prices.   Since Ida has been causing numerous disruptions to oil production, gas prices are expected to go up throughout the country this week.  5-15 cents per gallon in the next couple of weeks will be common – If you see a station that is $2.80 or $2.85 per gallon, it’s probably not a bad idea to fill up.

This past weekend, the City of Noblesville hosted its annual White River Clean Up program Friday with efforts to beautify the amenity’s water and neighboring land. This is the 27th year the city has led a conservation project of the waterway.  The White River Alliance, in cooperation with White River Canoe Company, offered canoes and kayaks to interested volunteers. After being launched from Rusty Oar, groups removed trash from the waterway as they enjoyed their time on the river.

Ivy Tech Community College’s Marion campus, will offer a free, walk-in COVID-19 vaccination clinic with the Pfizer and Johnson & Johnson options. No appointment is needed, but a state issued ID will be required.  Wednesday, September 1 from 10:00 a.m. to 6:00 p.m.

He returned to the practice field just three weeks after his foot surgery, but now Colts quarterback Carson Wentz has been forced off the field once again. The team announced today that Wentz, along with center Ryan Kelly and wide receiver Zach Pascal [rhymes with rascal], have been placed on the COVID list. The regular season starts in two weeks, when the Colts host the Seahawks.