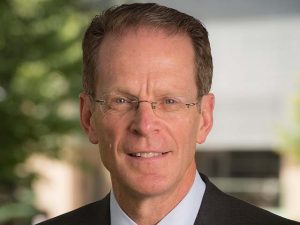 The Ball State University Board of Trustees has named Geoffrey Mearns the school’s 17th president.

Mearns currently serves as president of Northern Kentucky University, a position he accepted in 2012, and was provost and senior vice president at Cleveland State University.

A 15-year veteran attorney, he holds degrees from Yale University and the University of Virginia. He succeeds Acting President Terry King, who has served in the position since Paul Ferguson left a year ago. Mearns says his contract will begin in August.