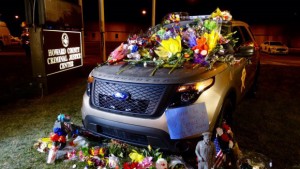 Gov. Mike Pence has ordered flags to fly at half-staff today in memory of a Howard County Sheriff’s Deputy killed in the line of duty. Deputy Carl Koontz was shot and killed early Sunday morning. Sgt. Jordan Buckley was also shot and is in stable condition. Investigators say the pair was serving a warrant at a mobile home park in Russiaville when the suspect opened fire. Both officers were taken to IU Health Methodist Hospital in Indianapolis, where Koontz later died. Police say a SWAT team responded to the scene, and the suspect was found dead two hours later. The suspect’s identity has not been released.