At a hearing set for November 10th, former Muncie Mayor Dennis Tyler is scheduled to plead guilty to a felony theft charge and be sentenced. The Star Press reports it would mark two years since Tyler was indicted by a federal grand jury, accused of theft of government funds for accepting a $5,000 bribe to steer work to a local contractor.

The October ArtsWalk is happening from 5–8 p.m. on Thursday, Oct. 7. The annual, free event celebrates art, music and culture in the community. It features a number of events including live music, art exhibits and and open house for the
Muncie–Delaware County Visitor Bureau Grand Opening: Open house from 5–8 p.m. Free parking is available in downtown lots and along select streets in the area.

Meridian Health Services Flu-Lapalooza, a One-Day FREE Flu Shot Clinic, is tomorrow October 6, from 11a-7p at Meridian locations throughout Indiana.  The FREE seasonal flu shots are for those six months and older.

An alarming new update from Google that hasn’t yet made headlines has suddenly put Chrome’s 2.6 billion users at risk of “surveillance, manipulation and abuse.” Forbes magazine reported this past weekend that the browser has issued one urgent fix after another this year, as high-risk exploits have been found.

If you grew up in the 90s, this will probably get you excited… New Kids On The Block will be bringing their tour to Gainbridge Fieldhouse in Indy in 2022.  Joining them…will be Salt-N-Pepa, Rick Astley, and En Vogue. Their “Mixtape tour” will be in Indy on Thursday, May 12.

Motorsports journalist Robin Miller died in August. His celebration of life was Saturday at the Indianapolis Motor Speedway.  Governor Holcomb also honored Miller with the Sagamore of the Wabash award. Miller was inducted into the Motorsports Hall of Fame shortly before he died.

In case you have not heard yet, Kings of Leon has canceled their 2021 tour –  they had a Thursday show scheduled for Noblesville. Three of the band members are brothers, and their mother recently passed away.

The Pride of Mid-America Marching Band of Ball State University will present their 2nd annual Showcase Performance on Sunday, October 24 at 3pm in Scheumann Stadium.   The State Fair Band Day Champions from Muncie Central High School will also be featured in the performance!  Link to purchase tickets can be found at bsu.edu/poma. Parking is free at the stadium.

An accomplished Muncie photographer whose work was known throughout Indiana and the nation, has died at age 97.  Ruth Chin died Oct. 1, according to David Cox, president of the Meeks Mortuary and Crematory in Muncie. Arrangements are still pending at Meeks but services are tentatively set for Tuesday, Oct. 12.

It’s time served for a former Muncie man after he pleaded guilty to severely beating a local woman. The Star Press reports 59 year old Ennis Elmire Cullum pleaded guilty to domestic battery resulting in serious bodily injury. The Star Press reports the judge imposed a three-year sentence with one year suspended. With credit for 563 days already spent in jail, the executed portion of Cullum’s sentence has been served.

Well known Muncie photographer Ruth Chin has died at age 97. According to the Star Press, she died on October 1st and arrangements are still pending at Meeks but services are tentatively set for Tuesday, Oct. 12th. Chin was Indiana’s first female Chinese-American photojournalist and was inducted into the Indiana Journalism Hall of Fame.

Meridian Health Services is excited to bring back Flu-Lapalooza, a One-Day FREE Flu Shot Clinic, on October 6, 2021, from 11a-7p at Meridian locations throughout Indiana. The Muncie Journal reports Flu-Lapalooza will take place at Meridian locations in Anderson, Bluffton, Connersville, Dunkirk, Indianapolis, Muncie, New Castle, Portland, Richmond, and Rushville. Participants can enter to win a $50 grocery gift card to be given away at each location.

An in-depth study, conducted by Emsi, reveals the significant positive economic impact Ivy Tech Community College makes on the state of Indiana, including the local impact in Delaware and Henry County. According to the Muncie Journal, the report outlines the return on investment the Community College makes to its major stakeholder groups – students, taxpayers and the communities it serves. Results of the analysis reflect a $3.9 billion cumulative annual impact.

The Muncie Journal reports Ontario Systems, a leading provider of enterprise workflow automation software built to accelerate revenue recovery and remove friction from the payments process for clients in the accounts receivable management (ARM), healthcare, and government markets announced the company will change its name to Finvi and update its corporate logo. 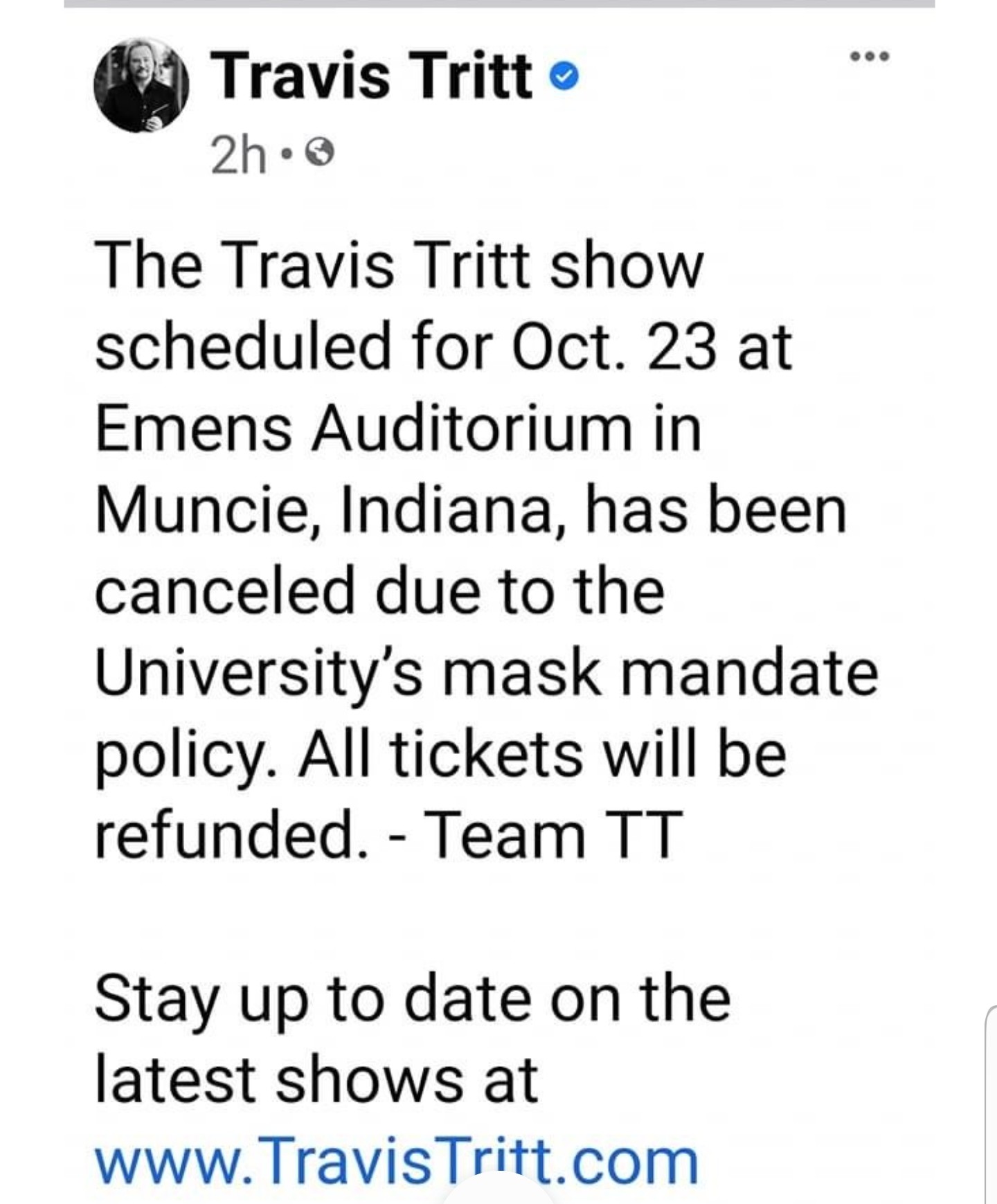 Country music singer Travis Tritt cancelled his upcoming show at Emens Auditorium, but the reason is not clear.  The venue issued a statement saying it was due to COVID related issues, but the singer has been on the record about his feelings about mandating masks.  His tweet last week that came a day before the Emens announcement said it was “due to the University’s mask mandate policy.”  You can see that tweet on our Local News page this morning.  Tritt issued a statement on August 20th that stated “…No government, employer, or private entity should ever be allowed to infringe on those rights and liberties…” and called such mandates “discrimination.”

Continuing COVID coverage.  from our Friday interview with Dr. Jeff Bird, President IU Health and BMH in Muncie, we asked if we are moving in a better direction

BUT, he clearly stated that we are all best-served to stay on alert

Ben Davis Homecoming football game was cut short after shots were fired outside the stadium.  WTHR says a 16-year-old was taken into custody after Officers arrived to find a 16-year-old male that had been shot in the arm.

Thursday evening in Anderson, a woman was hit and killed by a train, at the railroad crossing near 38th and Raible Avenue.   Fox 59 says the CSX Police is investigating the death.

The Muncie Afghan Refugee Resettlement Committee (MARRC) is working to welcome refugees from Afghanistan.  According to a press release sent by the City, using letterhead of a Muncie group called AWAKEN, Muncie is welcoming many refugee families from Camp Atterbury to become integrated in our community.   For more information on how you can help, please, follow MARRC on social media.

State Rep. Tom Saunders (R-Lewisville) will retire in 2022 after fulfilling his current term as state representative for House District 54, according to the Courier Times.

The Ball State women’s volleyball team is 3 – 1 in MAC now, and have Friday and Saturday road matches next up.

COVID booster shots.   Dr. Jeff Bird reminds that it’s all about the Pfizer, for now – and other criteria

OurShot.IN.gov has all the info.

A day after a fight at Anderson High School resulted in multiple arrests, officials were reviewing video of the incident from multiple sources and had put additional precautions in place to ensure student safety.  The fight happened Wednesday, and the Herald Bulletin reported all quiet on Thursday.

Lawrence Indiana Police are investigating after a Brinks employee was robbed at gunpoint while refilling an ATM, just after 10 a.m. Friday at the Chase bank at 4200 N. Franklin Road.  WISH TV said the employee said he was approached from behind by at least two men. One of them had a handgun.

Republican lawmakers gave final approval Friday to their party’s redrawing of Indiana’s congressional and legislative districts, brushing aside objections that the maps give them an excessive election advantage and dilute the influence of minority and urban voters, as reported by the AP.

Startup Weekend Muncie is back on, in person.  A press release explains this is a global organization powered by Techstars and Google during which participants get together on a Friday evening to pitch and listen to ideas, form teams, and set off to build a business over the course of a weekend. Absolutely no special skills or experience is required.  The in-person event is being held Oct. 8-10 at premier sponsor Accutech Systems, in Muncie.  Tickets are available now, but are limited, and can be purchased at a link on our Local News page this morning.

Tipton BMV is closed starting today:  Indiana Bureau of Motor Vehicles (BMV) Commissioner Peter L. Lacy announced that eight branches will be temporarily closed from today through October 30.  This is the second round of closures, due to labor shortage.

The property taxman cometh: Fall property taxes are due November 10th according to a note from Delaware county, and just this past Friday, the window of time to make payments started.  In Henry county, your Treasurer’s Office will be closed from Oct 5 until further notice – use the drop box – and they apologize for the inconvenience.

Hoosier deer hunters are being encouraged to share some of the deer they collect in order to help feed the hungry.  Hunters who harvest a deer can drop off the field-dressed deer at a local participating processor. The processor will create venison burgers to distribute to food banks. 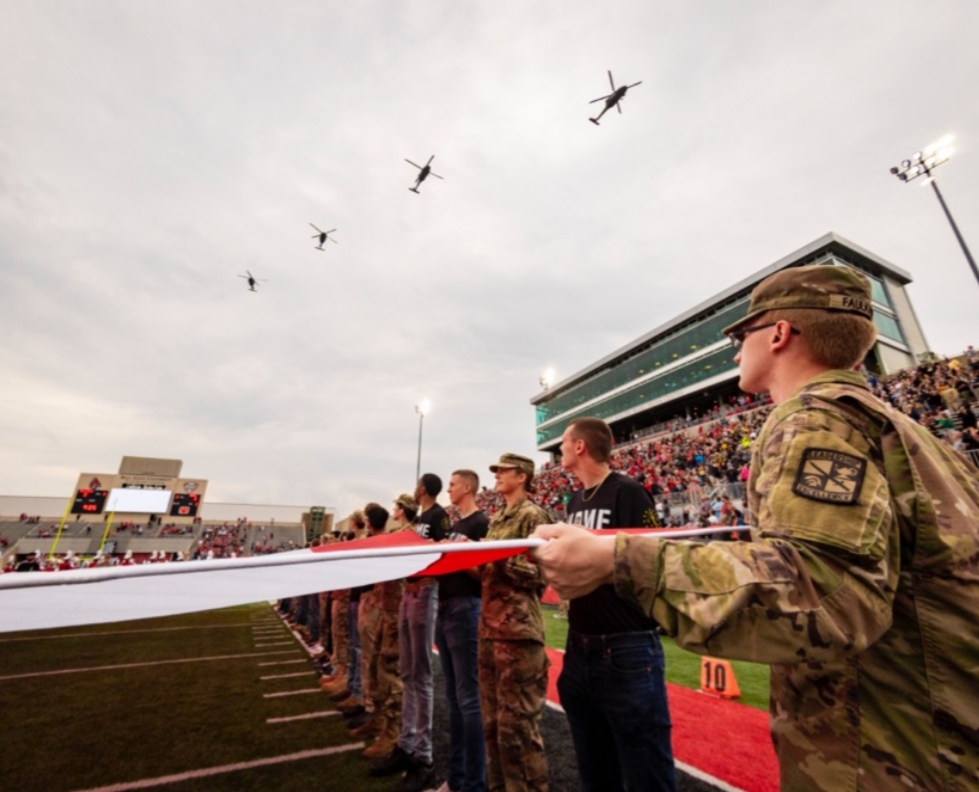 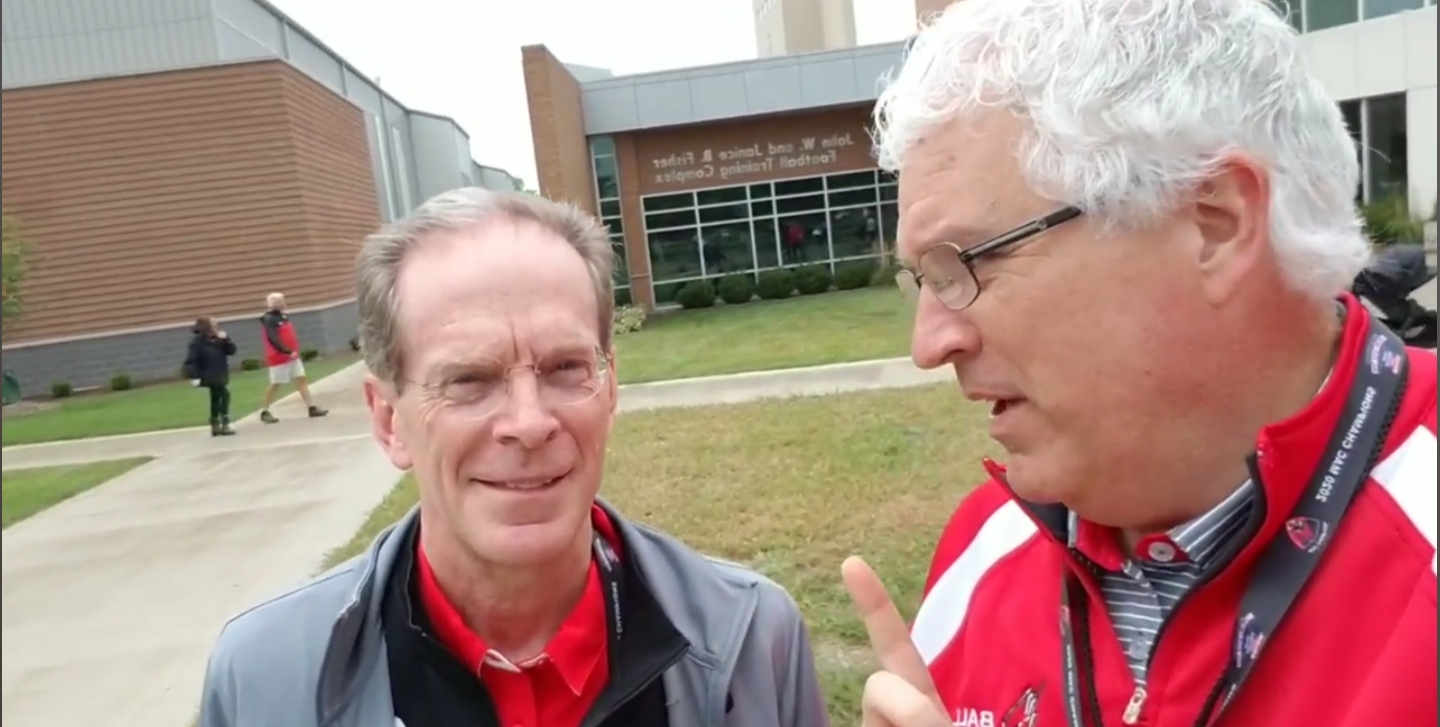 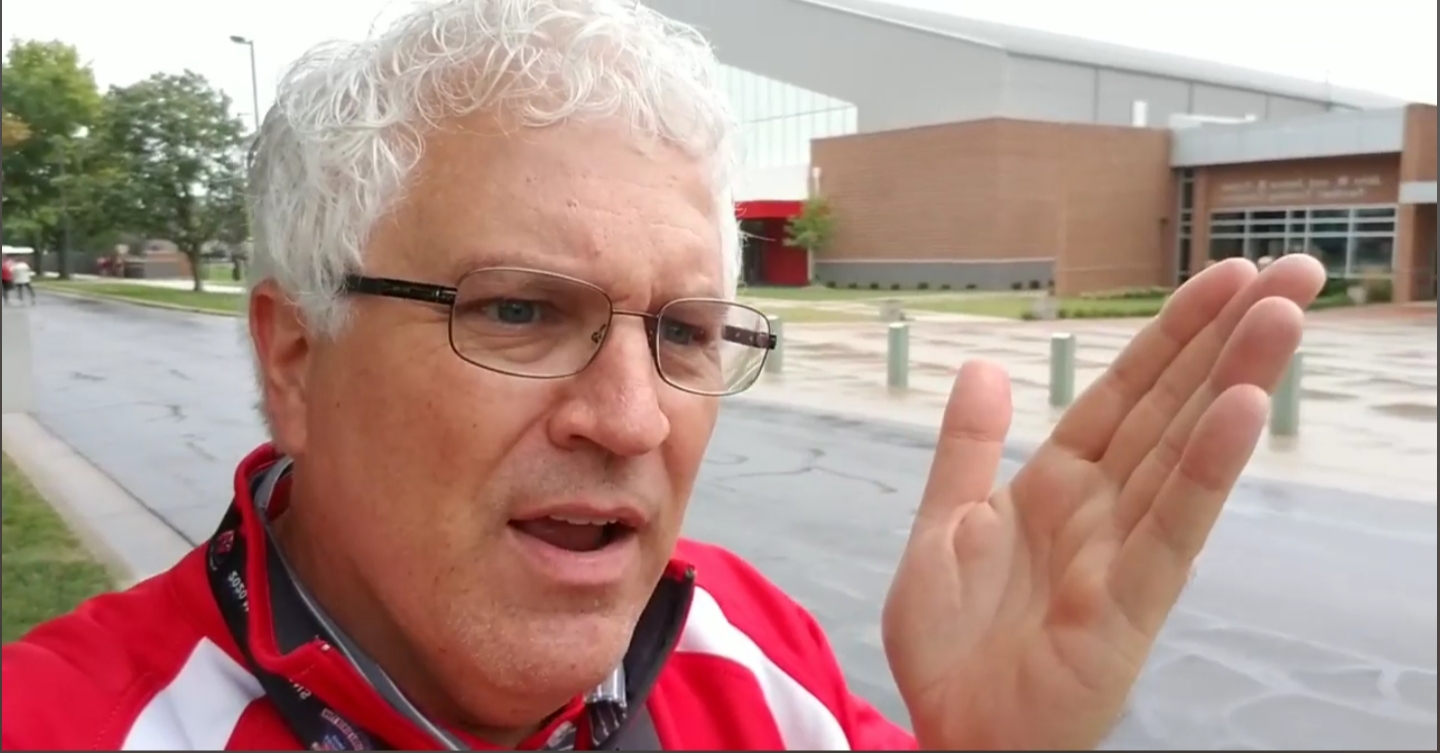 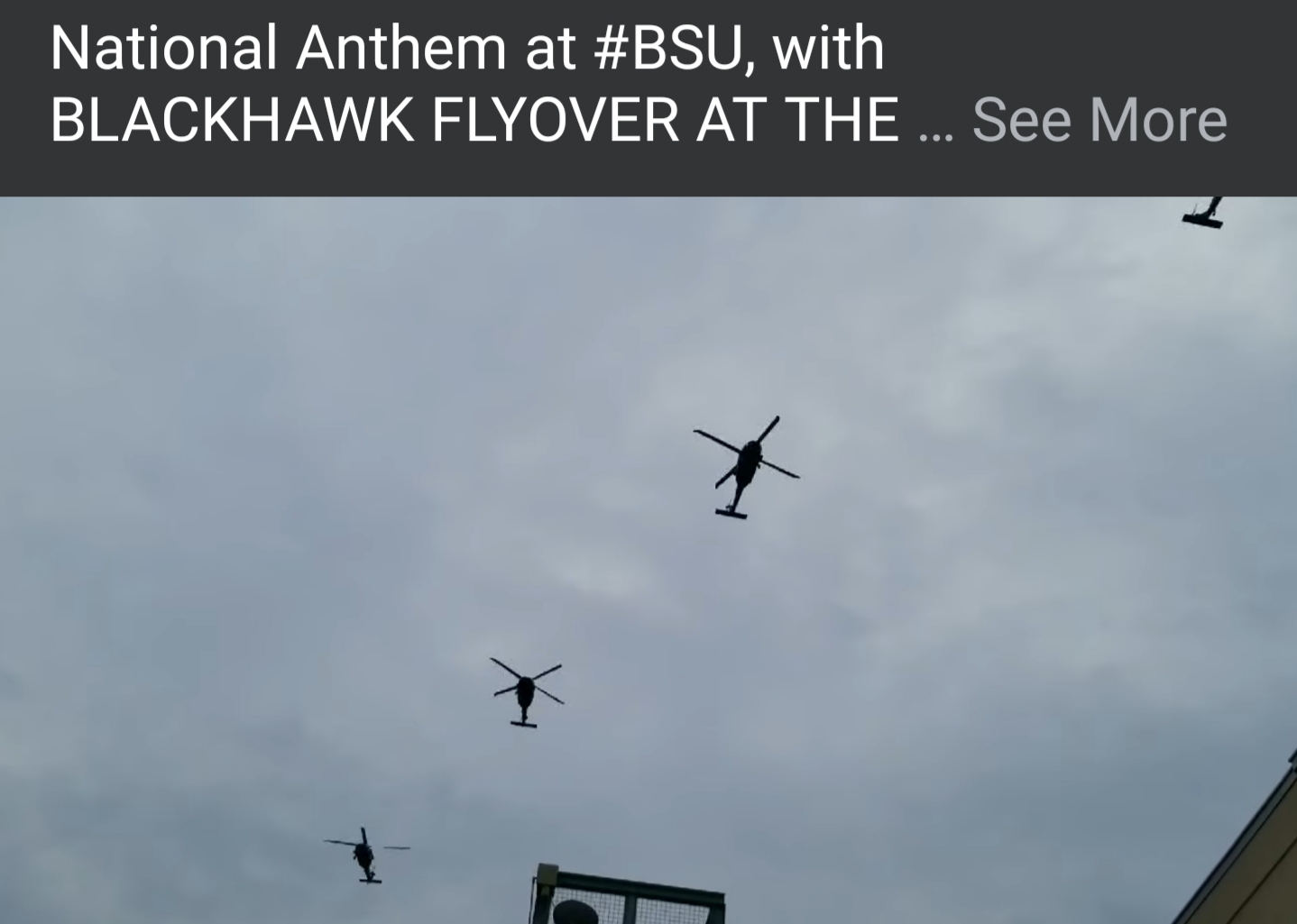 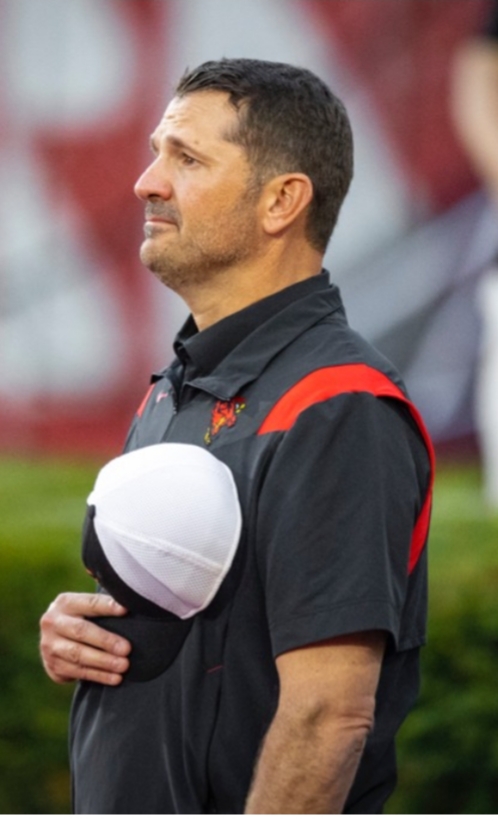 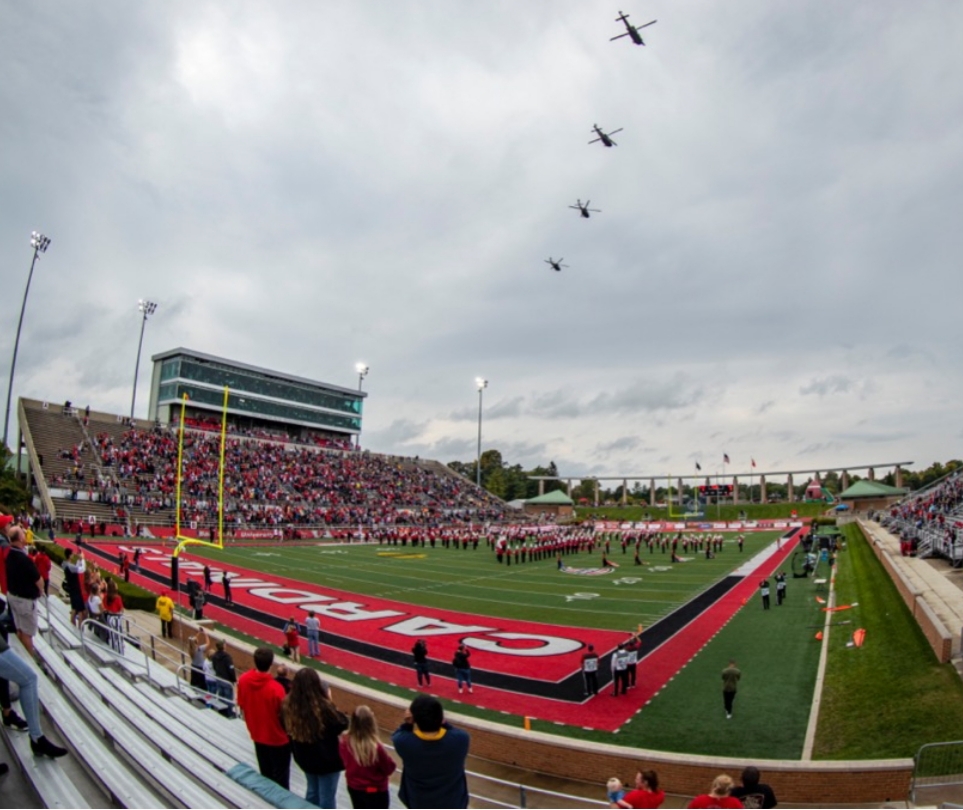 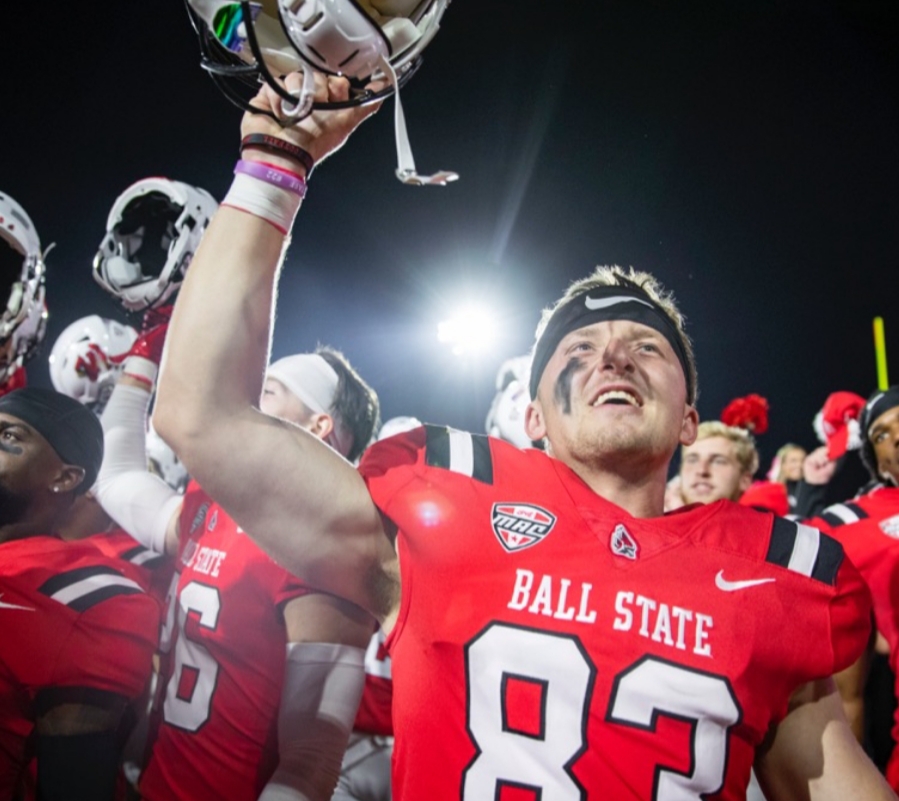 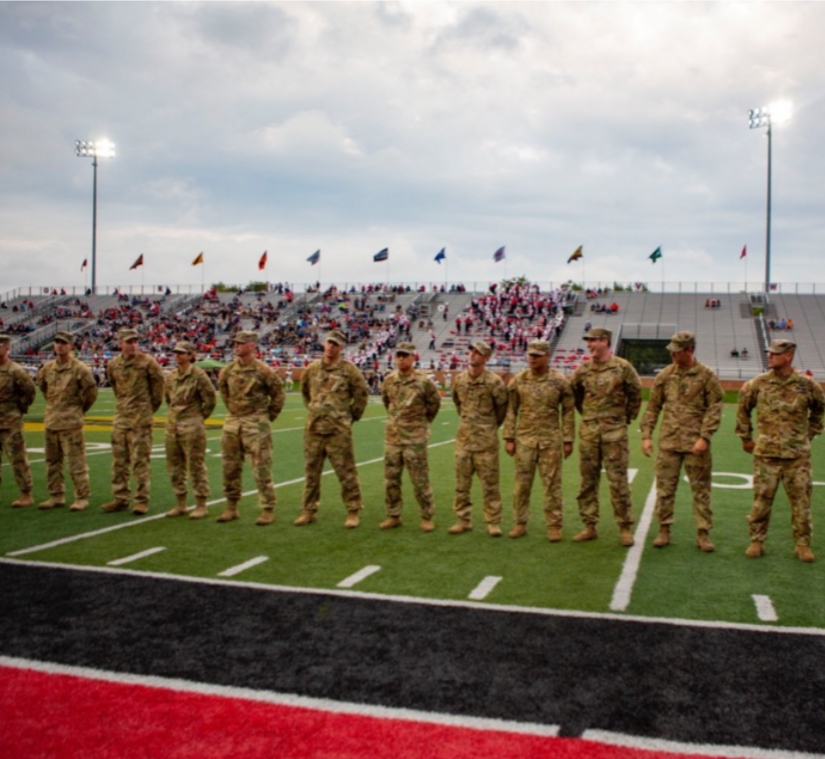 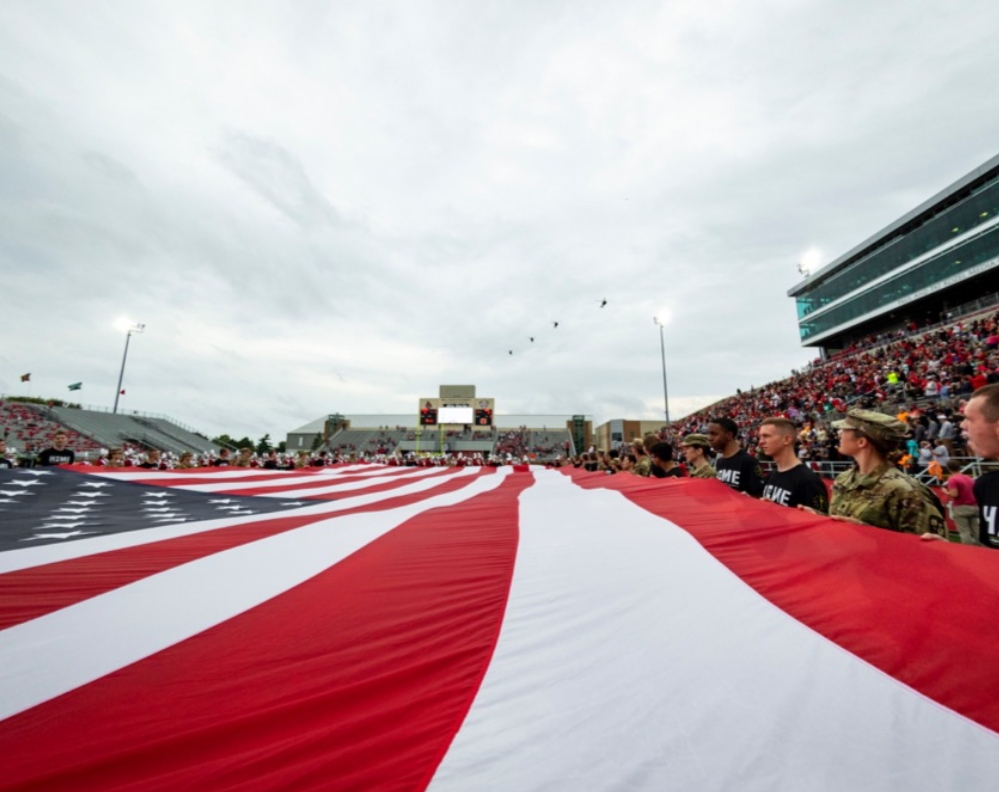 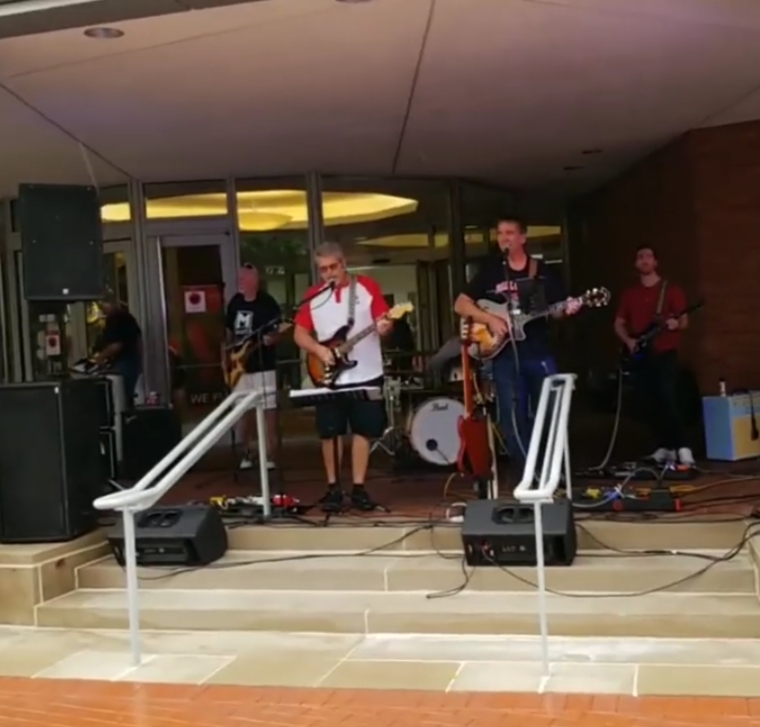 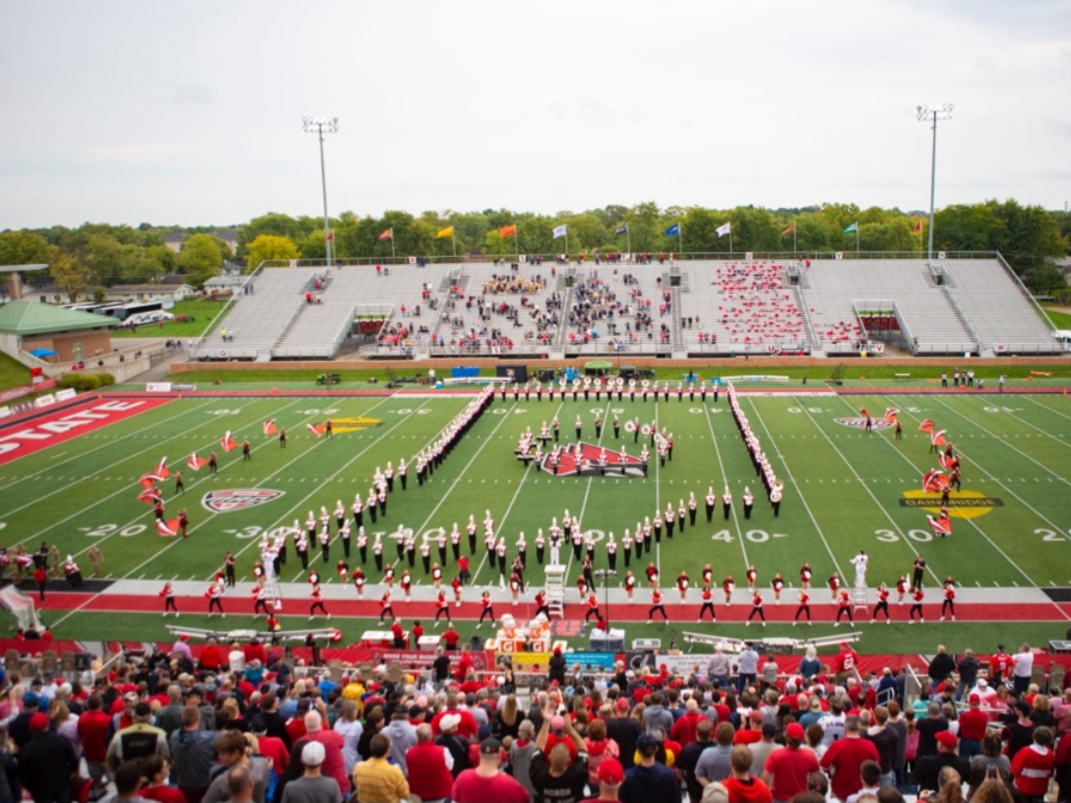 In front of 13,373 paid attendance,  the rain mostly held off, and the Cardinals got what some considered an unexpected win over Army on Saturday,  October 2 at Scheuman Stadium, as heard live on 104.1 HD1 WLBC and WLBC.com.  Photos here include pregame fun by The Five Speeds, a Blackhawk helicopter flyover, Coach Neu paying his respects during the National Anthem, and more.  (Some photos via BallStateSports.com, some via Steve Lindell).