A Muncie man faces charges in connection with bruises found on his 6 month-old child. 22 year old Jordan T. Storie is chargedwith battery on a juvenile and neglect of a dependent resulting in injury. The boy had been brought to a local physician’s office, reports the Star Press, with “significant bruising to his upper right arm that clearly appeared to be caused by someone grabbing and squeezing the arm.”

The Muncie Noon Rotary Club Board of Directors considers grant requests annually. The Club typically awards between $6000-$9000 to eligible 501(c)(3) non-profit organizations. The Board evaluates all requests as objectively as possible, consistent with the expressed priorities of the Club. MuncieJournal.com reports last year, grants were awarded to Boys and Girls Club of Muncie, Home Savers of Delaware County, Motivate Our Minds and the Muncie Civic Theatre totaling over $5000.

Meridian Health Services is providing free COVID-19 prevention resources to help the community stay healthy with the recent increase in COVID-19 cases at a time when area schools are preparing for teachers and students to return to the classroom. MuncieJournal.com reports Meridian is providing free COVID 19 rapid testing, free at home COVID test kits and free N-95 masks while supplies last. 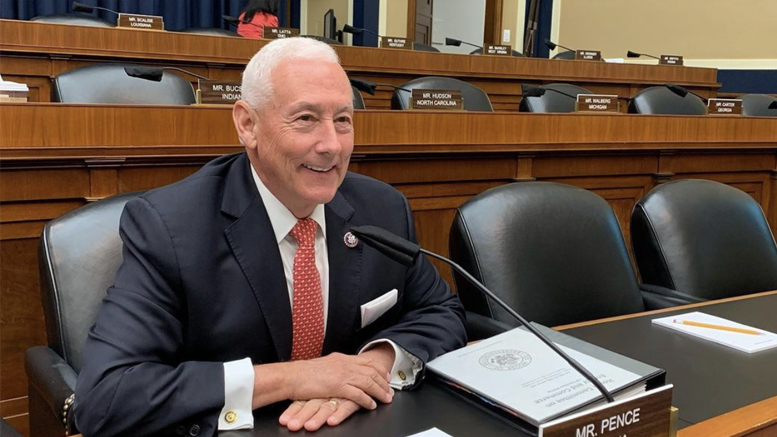 He had more thoughts about this subject – hear the entire segment on This Weekend in Delaware County Saturday on WMUN – 92-5FM and 1340AM.

Yesterday’s storm report—That burst of storms in WLBCland yesterday between 8 and 10 a.m. hit a number of trees at Shadyside Park in Madison County.  WLBC Reporter Sean Mattingly saw several social media picture posts depicting the tree damage.  Duke energy customers seemed to get hit hardest with around 8,000 customers off at the peak.

Senator Tim Lanane was chosen as the 2022 “Distinguished Citizen of Madison County” and will be honored at the Paramount Theatre on Sept. 27 during an awards dinner. WHBU’s Bret Busby asked him for his reaction.

And, why he thinks the board chose him.

The criteria used includes a candidate’s qualities of distinguished service, leadership and support for Madison County over the previous 15 to 25 years, according to Board Chair Charles Shumate, quoted by The Herald Bulletin.

Pizza King has another hiring event coming up on Monday, August 8th at the 30 W. Grand Ave location in Anderson. If hired, applicants will be eligible for a $650 retention bonus at select locations.

If you go to Indianapolis Colts training camp, you may notice strange looking padded shells on player helmets.  That’s a new piece of tech the NFL is testing, called Guardian Caps.  It’s a special piece of equipment with the brain in mind.  They tell WISH TV that the force of a hit is reduced by at least 10-percent or so.

In case you missed it – Jacob Pruitt’s no-hitter lead the Muncie Post 19 Chiefs to 3rd American Legion state baseball title,  with a 4-0 victory over Terre Haute at Highland Park in Kokomo on Saturday, July 30, 2022, according to the Star Press.

You should be on BUS WATCH –   Many more school districts start today – and more than 200 agencies plan to participate in the back-to-school Stop Arm Violation Enforcement campaign – better known as SAVE. The overtime patrols are funded by the National Highway Traffic Safety Administration through grants administered by the Indiana Criminal Justice Institute (ICJI).

The City of Carmel has once again been rated the No. 1 city in Indiana for bicycle friendliness by People for Bikes.

Hoosier history – This week in 1900, four young boys found an alligator in the canal near downtown Indianapolis, not far from the Statehouse.  The local newspaper reported that the creature had lived along the area for about two years and had been owned by a nearby adult before it escaped.

Elwood police officer Noah Shahnavaz was shot to death early Sunday morning during a traffic stop. The Herald Bulletin reports the 24 year old Shahnavaz was a five-year military veteran who had been with the Elwood Police Department for 11 months. Carl Roy Webb Boards II, 42, Anderson, was arrested on a preliminary charge of murder in connection with the shooting.

A Muncie man is charged in a deadly shooting outside the northside Walmart store on Saturday night. Police went to the store at 4801 W. Clara Lane, at 8:44 p.m. where a man identified as 34 year old Samuel Gillum was found with a gunshot wound to the head and later died at the hospital. 20 minutes later, police spotted a possible suspect and ended up taking 32 year old Tyler Abrams into custody. He’s preliminarily charged with murder, criminal recklessness and obstruction of justice.

A Muncie man is charged in the deadly stabbing of his mother. 28 year old Myron Armstrong is being held in the Delaware County jail without bond, preliminarily charged with murder. The Star Press reports emergency responders were sent to a home in the 1000 block of North Burns Street where 61-year-old Sondra Armstrong called emergency dispatchers and said she believed her son had stabbed her. The victim was taken by ambulance to IU Health Ball Memorial Hospital, where she was pronounced dead.

Delaware County commissioners have approved an agreement with Ivy Tech Community College to help offenders obtain employment at local manufacturers through the JUMP program. According to the Star Press, JUMP places offenders within the county judicial system with participating manufacturers in the county. Ivy Tech provides skills training and will need to hire a coordinator for the effort, hopefully by October.

Have you figured out what to do with the abundance of zucchini and tomatoes your garden is producing? Look no further. MuncieJournal.com reports you can donate your excess garden produce to 16 sites in Delaware, Blackford, and Jay Counties. Those community organizations will make sure the produce gets to our neighbors who can use it most. The Food Council of East Central Indiana has launched the Grow-a-Row campaign to help get that produce to neighbors in need.

Another police officer killing –  State Police are investigating the shooting and killing of an Elwood police officer – during a traffic stop.  The suspect was arrested in Hamilton County, where State Police said a pursuit ended in a crash on Interstate 69 near 106th Street in Fishers.

A preliminary investigation by Indiana State Police Detectives revealed an Elwood Police Officer conducted a traffic stop on a 2012 Buick LaCrosse near the intersection of State Road 37 and County Road 1100N in Madison County, Indiana. For an unknown reason, the suspect exited the Buick and fired multiple rounds striking the officer at least one time.  Before additional officers arrived, the suspect fled from the scene in the Buick. Responding officers from Elwood Police Department  and Madison County Sheriff’s Department located the wounded officer and administered life-saving measures until medical personnel arrived. The officer was transported by ambulance to Ascension St. Vincent Mercy in Elwood and later flown by helicopter to an Indianapolis area hospital, where he succumbed to his injuries.

Just after 2:30 a.m., Hamilton County Sheriff’s Department located the Buick and attempted to initiate a traffic stop. The Buick failed to stop and continued southbound on State Road 37. Hamilton County Sheriff’s deputies continued to pursue the Buick and deployed a tire deflation device near the area of State Road 37 and 146th street. The Buick continued southbound on State Road 37 toward Interstate 69. While on Interstate 69, Fishers Police Department conducted two Precision Immobilization Techniques (PIT). After the second Precision Immobilization Technique, the vehicle struck a  median barrier wall and became immobilized. Responding officers were able to take the suspect into custody without further incident.

This is an active and ongoing investigation led by Detectives from the Indiana State Police Pendleton Post. Further information about the identity of the officer and suspect will be forthcoming.  At the completion of the investigation, it will be turned over to the Madison County Prosecutors Office.

Muncie police officers quickly arrested a suspect for a deadly Saturday evening shooting that happened in the parking lot of a Walmart in Muncie.  Anyone with information about the shooting is being asked to contact the Muncie Police Department Detective Division at 765-747-4867  or Muncie Police Dispatch at 765-747-4838.

He explained to WLBC’s Steve Lindell how the $2,500 grant came to be.

Senate Bill 1, a ban on abortion in Indiana with exceptions only for rape, incest and to save the life of the mother, was passed by the Indiana Senate Saturday by the narrowest margin possible – one vote.  The bill, passed 26-20 and with 10 Republicans voting against it, would provide one of the nation’s strongest bans on abortion.

Ball State University is the exclusive sponsor of the Ball State Cardinal Super Ferris Wheel.  Two weeks ago, we asked what that sponsorship cost, and received this reply from a university spokesperson, “The University’s investment in this sponsorship is not a new cost, but rather a reallocation of already accounted for marketing funds. Given the competitive nature of such sponsorships, we’d rather leave it at that.”

A new study from Advanced Dermatology says more than 1 in 10 don’t wear sunscreen at all,     72% have never been checked for skin cancer by a doctor,  68% don’t know the difference between sunblock and sunscreen, 2 in 5 men (39%) rarely or never use sunscreen on their body, compared to 28% of women.

News quick hits:  A former guidance counselor’s termination by Roncalli upheld by Court of Appeals.  It was a New Castle man killed early Saturday morning in a single-vehicle crash on Interstate 865 – WTHR says 82-year-old Terry Ingle was a front seat passenger in the vehicle that drove into the median and landed upside down in a creek -he died at the scene.

The lighter side of news – last week, we aired a story about Hershey’s predicting a candy /chocolate shortage for Halloween.  Well, Manager of Victory Honda Muncie Jason Shively heard that – and his affinity to provide mostly full-sized candy bars preordered 888 pieces of candy over the weekend – cost not disclosed – and he asked that I not share his Yorktown address on the internet.

Now, they want us to wait –  U.S. regulators say they are no longer considering authorizing second COVID-19 booster shots for all adults under 50 this summer. Instead the Food and Drug Administration said it will await revamped vaccines targeting the newest viral subvariants that are expected by September.

News quick hits:  A former guidance counselor’s termination by Roncalli upheld by Court of Appeals.  Fishers:  four people seriously injured in a head-on crash early Saturday morning – the head on crash happened on 126th Street, near Promise Road, at around 1 a.m. according to WTHR.

Hoosier History – this week in 1994, the first Brickyard 400 NASCAR race was run at the Indianapolis Motor Speedway.  The winner was 23-year-old Jeff Gordon from Pittsboro, Indiana.